Animals That Live in the Desert

Animals that live in the desert have really got it tough, but somehow, they've managed to adapt and survive. Find out more in this article. 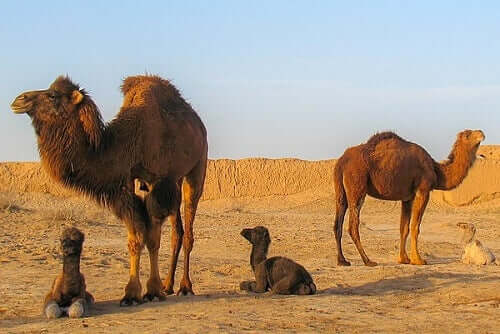 They can stand the high temperatures and stifling sun. They can go days without drinking water and look for food at night. Animals that live in the desert have a pretty tough existence, but they’ve adapted to the environment and its extreme conditions. In this article, we’ll tell you more about some of them.

Animals that live in the desert

Despite the heat, wind and dry weather, the animals below have all been able to adapt and survive in the harsh desert environment.

Camels are Artiodactyla belonging to the Camelidae family. Also known as dromedaries, they live in the dry or desert ecosystems of Asia and Africa. They’re ruminants with no horns or hooves, and they can store fat in their humps (not water, as commonly believed). They can live for up to 50 years and measure over six feet tall (seven feet including their hump). Although they’re generally passive animals, they can spit eye-burning saliva to defend themselves.

Also known as the red-necked ostrich, these birds live in North Africa and are the most robust and fastest members of the species. They can survive several days without drinking water. Their neck and legs are both reddish in color, though this can become more intense in males during mating season. Many of them live in the Souss Massa National Park in Morocco, and they are currently in danger of extinction.

This bird lives on the desert and coastal plains around the Mexico-United States border. They mainly stay on the ground, only gliding towards trees and bushes. They normally eat small reptiles and insects and have a dark plumage to blend in with the ground. Their large tail serves as a “rudder” for running and making fast turns. They can reach speeds of 20 mph.

This Artiodactyla mammal is another dromedary that lives in the deserts of North Africa (between Egypt and Western Sahara). They can be over two feet tall, weigh up to 44 lb, and they have long ears, curved horns, a light brown body, and a white belly.

These gazelles prefer ecosystems like steppes, mountainous deserts, and grasslands and can go a long time without drinking since they get moisture from leaves. This species is more active at night.

Another animal that lives in the desert is this species of antelope, which can grow to over 3 feet tall and weigh over 260 lb. Both males and females have vertical ringed horns. They’re related to the Arabian Oryx and they live in deserts or rocky areas. They can survive without water by eating the little desert plants that grow there. They’re normally fairly inactive during the hotter parts of the day and move around between dusk and dawn.

This is an Australian wolf species that has characteristics of both wolves and dogs. It’s believed that their appearance is similar to the original ancestors of our domestic dogs. They have a yellow, reddish, or sand-color coat and live either alone or in packs. They’re very territorial, and although they don’t bark, they do howl a lot.

Their official name, Canis latrans, means “barking dog”, and they’re carnivorous mammals that mainly live in North America (particularly Canada and the northern US). There is a subspecies known as the California Valley Coyote which lives in desert areas with very little vegetation or water.

The black vulture mainly lives in the southern US and feeds on eggs and newborn animals, using their excellent eyesight to catch food. They can weigh up to 4 lb and have mainly black feathers. They prefer low areas with rocks and stones.

Some other animals that live in the desert include the Brazilian bush anole, fennec fox, gerbil, peregrine falcon, and hedgehog.