The Gazelle: Habitat, Characteristics and Behavior

From lions to crocodiles, Africa is home to some of the world's most fascinating wildlife. Today, however, we're going to be taking a closer look at the gazelle. 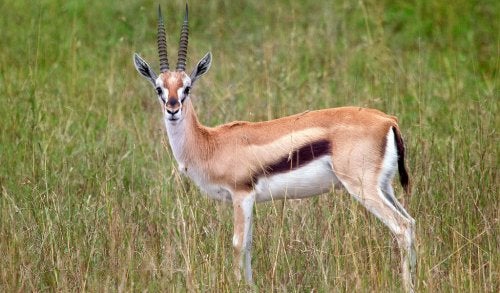 Who hasn’t watched transfixed as a heard of gazelles leapt gracefully across the African savanna – even if it was only on TV? These fascinating animals are supremely agile, and can reach astonishing speeds. Want to find out more? In this article, we’ll tell you everything you need to know about the gazelle.

Let’s learn more about the gazelle

Their slender frame and long, thin legs are what give this animal its great agility, and help it reach speeds of up to 60 mph, and maintain speeds of 30 mph for long periods of time.

The most common subspecies of gazelle are the Grant’s and the Thomson’s gazelle.

The Grant’s gazelle is a strong, robust animal with a dark yellow coat. They have a black vertical stripe running up the top of their back legs, while the inside of their legs is white. They can measure up to 35 inches in height, and weigh 121 – 176 lbs. Their long, powerful horns are described as “lyre-shaped”, curving first back, then upward.

Paying close attention to the shape of their horns has allowed experts to identify several different subspecies of gazelle. In females, the horns are always smaller and more delicate.

They are generally smaller than Grant’s gazelles, and usually weigh between 44 and 66 lbs. Their horns can reach up to 12 – 16 inches  in length, and curve slightly backwards, although the tips face forward.

In addition to these two subspecies, there are at least 16 other recognized types of gazelle.

These fast, agile animals live in the African savanna and Southeast Asia, usually on plains and open spaces with very little vegetation. This terrain allows them to make the most of their athletic abilities.

It also allows them to keep a lookout for predators. They sleep very little, and always with one eye open (so to speak) so that nothing can sneak up on them. Predators often catch them lying on the ground, but they’re always on the alert, and prepared for an attack.

The Thomson’s gazelle has a very unusual way of dealing with danger: they use an exaggerated, bounding leap, known as stotting. They repeatedly jump straight up with their head and legs rigid and their tails tensed. This warns other gazelles of the danger, telling them all to run. It’s also a demonstration of strength and power which serves to startle enemies.

The gazelle’s main predators include the following:

Gazelles are herbivores, and feed on shrubs, grasses and any plants they find that contain enough water to keep them hydrated in the soaring temperatures. Sometimes they may also eat insects and larvae, although this is fairly uncommon.

When a female gazelle comes into season, the males will fight one another for the right to mate with her. These are generally short fights, and while they might seem to be playing, many males end up with broken or cracked horns.

Although they’re usually silent animals, during mating they will emit low, distinctive grunts that allow individuals to identify one another.

Gazelles usually mate in the fall months, from September to November, so that their calves are born in the spring.

So, did you enjoy learning more about the gazelle? Learning more about animals, even those that we may never be able to see in real life, not only increases our knowledge of the natural world, but also our love for animals.

The Habitat of the Dibatag (Clark’s Gazelle)
The dibatag is a fascinating, unique species of mammal, and we're going to tell you a bit about its habitat and characteristics. Read on to learn more! Read more »
Link copied!
Interesting Articles
Wild Animals
5 Animals that Live in Grasslands