The Scimitar-Horned Oryx: A Grasslands Antelope

This is the only species of antelope that has curved horns. Discover more about the scimitar-horned Oryx below. 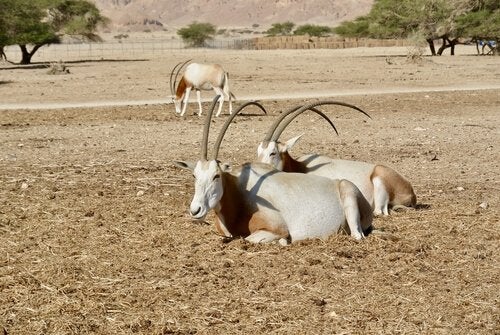 Today we’ll be talking about a beautiful animal that you may have never heard of: The Scimitar-horned oryx. In this article, we’re going to tell you all about it.

A description of the Scimitar-horned oryx

The genus “Oryx” includes the so-called “antelope oryxes”. Four different species are known, but one of them stands out for its beauty: the scimitar-horned Oryx (Oryx dammah).

We’re talking about very robust animals, with a weight of between 300 and 450 pounds. They have short limbs that end in wide hooves.

The animal’s fur is predominantly white; however, their legs, neck, and chest areas show a reddish hue.

And as you may have already imagined, the most visually impressive feature of these animals is their horns.

Both males and females have long, symmetrical horns that curve backward. They can measure up to three feet long and, as they grow, they bend backward naturally. 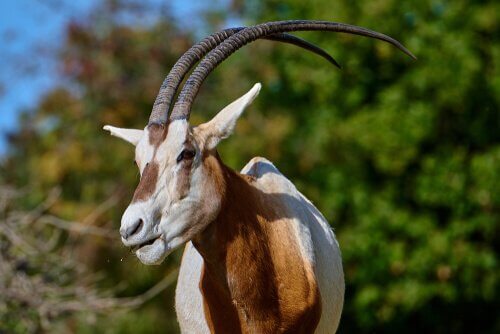 This curious shape has obviously earned them the name that these animals are known for. It reminds us of the curved sabers used by some people of the Middle East.

When there are any territorial or hierarchy disputes, then they use their powerful horns to engage in fights. The fighters ram their horns head-on, and, because of this,  they rarely ever hurt each other.

Before their disappearance from the wild, these antelopes inhabited the arid and semi-arid grassland areas of Northern Africa. They could also be found in the Sahara desert at some points in history. Some historians believe that in ancient times the Egyptian civilization tamed the scimitar-horned oryx to farm them for their meat.

Their diet is based on grass and different species of shrubs. Like other desert animals, they have adapted to survive during long periods of time without drinking any water. They extract what they find in fruits and succulent plants when there are no water sources near them.

Why did they become extinct in the wild?

Firstly, the main cause has to do with the excessive hunting that these animals have suffered. Their extraordinary antlers have made them targets and victims of hunters in recent decades.

On the other hand, the loss and degradation of their habitat has also contributed to their disappearance. The loss is partly due to the human occupation of their territory.

Cattle ranching, and competition with domestic animals for resources, have also played a part in their decreasing numbers. Before the last century, their population had already begun to drop.

As a result, by the year 1985, specialists could see evidence of around 500 specimens of this animal. Since the year 2000, there has been no firm evidence of them living in the wild. This led to the scimitar-horned oryx being declared as extinct in the wild by the IUCN.

To avoid losing them completely, some countries such as Tunisia or Senegal have carried out a captive breeding program. Gradually, some oryx couples have been released into nature reserves. Because of this, we believe there’s still some hope of seeing the oryx in the wild again. 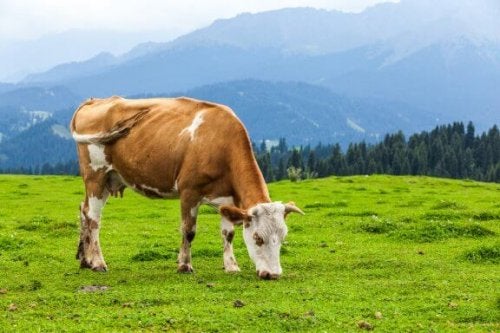 The Importance of Herbivores
All animals play important roles in every ecosystem they live in. Today, we're going to explain the importance and role of herbivores.  Read more »
Interesting Articles