The Patagonian Mara looks like a hare, but it's actually a species of rodent. Find out more in this article! 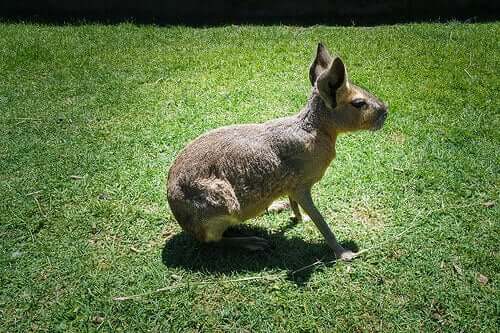 In Argentine Patagonia, there’s an animal that looks like a hare but is actually a large rodent. It’s the Patagonian mara, an endemic, monogamous herbivore that usually sits on its hind legs with the front legs stretched out, just like a dog.

The Dolichotis patagonum, known as the Patagonian mara, is distributed in semi-arid areas between central and southern Argentina and chooses places with lots of herbs and bushes.

Here’s a brief description of their physical features:

Meet the Patagonian mara, a large rodent that lives in South America. This endemic species grabs your attention because it runs like a hare and sits like a dog.

This is a daytime animal that lives in groups of between 3 and 50 individuals. However, they’re monogamous and will form partnerships that last until they die. This is how they guarantee successful reproduction.

To win a future mate, the males have to work hard and chase for a long time. The females go into heat every three or four months and give birth to between one and three babies after three months of pregnancy.

Newborns stay in a ‘communal’ burrow, built by the group, although they sometimes appropriate vacant burrows made by other animals, such as the southern viscacha. Here, they’ll be cared for by the various females in the group.

Breastfeeding lasts about 11 weeks. The females’ breasts are arranged in such a way as to allow them to feed whilst they’re sitting. This way, they can still keep a lookout. Once they’re eight months old, they’re already ready to reproduce.

Peculiar things about the Patagonian mara

If they sense that they’re being pursued, the Patagonian mara can run very fast (faster than 35 mph) and they’re very agile. This is why many people think that they’re a species of hare. In a single movement, they can move about six feet, using the nails on their hind legs to gain momentum.

In reality, this large rodent is more closely related to guinea pigs because the two species belong to the Caviidae family.

They also play a fundamental role in the Patagonian ecosystems. As a highly mobile herbivore, they’re vital for the distribution of seeds over great distances through its feces.

One very interesting fact is that the Patagonian mara drinks hardly any water. It turns out that they get the necessary water from the roots of plants, which is a fundamental part of their diet.

An endangered species and chosen as a pet

The Patagonian mara is categorized as ‘vulnerable’ by SAREM, the Argentine Society for the Study of Mammals. But, beyond its usual predators (cougars, birds of prey, and some species of fox), its current greatest enemy is man.

Some of the reasons that humans are endangering this species include:

As it happens, this rodent can adapt well to life in captivity. Long ago, it was common to see them in zoos, and they had no problem approaching the visitors. As a result, in many cases, the Patagonian mara is adopted as a pet. If so, they can expect to live for more than 10 years.