Guinea pigs became popular with the European upper classes around 300 years ago, and now are more popular than ever! 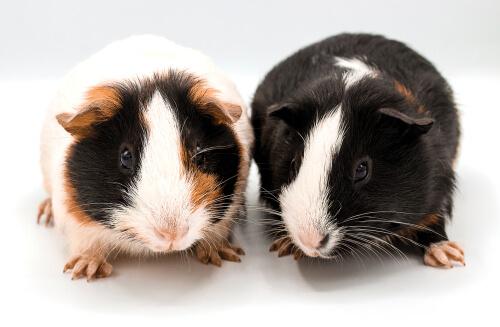 Guinea pigs have become a very common pet in the western world. As popular as they are, there are also many things about them most people don’t know.

The problem with that is that some of them are very important in order to ensure you’re caring for them properly. Keep reading to learn some fun facts about guinea pigs, and how to care for yours!

Guinea pigs also go by a couple other names: cavies, and their Latin name, Cavia porcellus. They belong to the Caviidae family, with a characteristically rectangular head and an almost invisible tail. In recent years, this animal with Peruvian-Bolivian origins has become one of the most popular pets for kids.

Here are some of the most interesting fun facts about guinea pigs:

In South America, people traditionally call guinea pigs cuy. This comes from the short, sharp sound they make to communicate. There are many things that lead them to communicate, but they generally do it in stressful situations like fear or hunger.

They’re sociable animals, and you’ll often find them in groups of five or more in the wild. That’s worth thinking about if you want to have one as a pet. It means you should get at least two so that they have friends to interact with. But no matter how many you buy, they’ll need your human affection too.

Guinea pigs are strict herbivores. In the wild, they eat all kinds of seeds, fruits, vegetables, and leafy greens. If you have guinea pigs at home, you can buy them processed foods rich in vitamin C. This is a crucial nutrient for them because their bodies can’t synthesize it, and it’s important for their skin health.

Guinea pigs are a big part of the diet in the Andes. You might see them fried, like pork or veal, or on a kebab at city food stands. They have a great nutritional balance, with 20% protein and 7% fat content.

The most common type of guinea pig you’ll find in a pet store has short hair and weighs about two pounds. But there are also other breeds with different body sizes, colors, and hair length.

For example, there’s the “Skinny Pig,” which is hairless except for a little bit on their muzzles and legs. Then there’s the Rex guinea pig, which can weigh up to five pounds.

Although they have a good sense of sight, they have some limitations on that front. For one thing, they have trouble calculating distances and heights. This leads them to fall a lot and have accidents when they’re running.

“Being a guinea pig”

The expression “being a guinea pig” comes from the fact that they’re used for a lot of scientific research. They’re commonly used in the health industry as early test subjects for new treatments, but scientists also use them to study cognitive processes because they’re such quick learners.

Want to know one of the grossest facts about guinea pigs? Like rabbits and many other animals, they practice coprophagy, or feces-eating. They do this because it helps them get essential nutrients and minerals like vitamin B. It also helps them keep up healthy levels of gut bacteria for their high-fiber diet.

Their teeth grow throughout their lives. This makes it absolutely essential to buy processed foods if you keep them as pets. These foods are generally “hard” or have hard things in them, which work to file a guinea pig’s teeth.

Why are they called guinea pigs?

The reason we call them guinea pigs is that in the 18th century, Dutch and British traders brought them from South America to Europe, with a stop in Guinea on their way. That mistaken idea of where they came from gave them their name.

Guinea pigs, which have been popular ever since upper-class Europeans started to buy them over three hundred years ago, are now a common pet option for little kids. That said, their need for good hygiene, diet, and affection require responsibility from their owners.

Ideas to Improve Your Guinea Pig’s Cage
Guinea pigs are social, appreciative, and expressive animals. They're happy with very little, but you can easily improve your guinea pig's cage and improve their quality of life. Read more »
Link copied!
Interesting Articles
Hamsters and Rodents
Stress in Guinea Pigs: All You Need to Know

Most rodent pets live in cages. While we sometimes let them out for exercise, most of their time is spent in a fairly small space where they eat, sleep, or do their…

Hamsters and Rodents
5 Species of Hamster

Hamsters are very popular pets, particularly among children. They're friendly, independent, and easy to care for. However, not many people realize that there are several domestic species of hamster and…

Rodents (rats in this case) are the first link to study the effects of new drugs or medical techniques. Their…

Interesting Articles
Dogs
Do You Know What Dog Mushing Is?