A study by the University of Texas investigated stress experienced by Atlantic and Pacific whales between 1870 and 2016. 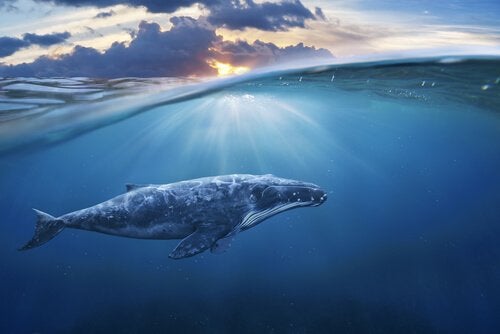 Animals in captivity can often suffer stress, and this is a topic of great concern these days. In today’s article, we’ll see that even whales experience stress, as unlikely as this may seem.

Many people know that seismic surveys affect cetaceans, but a new study has shown that whales became stressed because of human activities much earlier than that, in World War II.

The study, led by the University of Texas and published in Nature Communications, analyzed stress experienced by Pacific and Atlantic whales between 1870 and 2016. In particular, they studied the blue whale, the humpback whale, and the common rorqual, which are some of the best-known whales.

How is stress measured in whales?

These kinds of studies are often difficult to carry out. This is because they require taking blood samples, which, in itself, will put the animal under stress. However, in this case, they used whale cerumen, which forms ear plugs with layers. These allow scientists to estimate both an animal’s age and the amount of cortisol.

Normally, they use these plugs to estimate an animal’s age. They are similar to tree rings. Each layer of wax represents months in a whale’s life. They can even distinguish feeding periods from migration periods thanks to the colors of the layers. This is how we can get a lot of data about the lives of these huge animals.

Thanks to the presence of whale remains in museums around the world, it’s possible to carry out studies of this kind without disturbing the large cetaceans in their natural habitats, and, at the same time, to make progress with these types of wildlife studies.

Scientists have used cortisol in hundreds of studies to measure stress. In this case, they found that cortisol levels rose in the 1960s, one of the most booming decades in whaling. Similarly, whales were very stressed during the 1920s and 30s. Those years were another intense whaling period in which the whale population dropped considerably.

However, researchers were particularly surprised by the levels of whale stress during World War II. War affects animals, even though there was a decline in whaling during that time.

It seems that naval battles, submarines, and underwater detonations can also stress these animals. Another fact that surprised researchers is that the stress levels experienced by whales are increasing, even though whaling has decreased enormously since the 1970s.

Researchers suspect that one of the reasons why human activities that aren’t linked to whaling still stresses these creatures out is the fact that whales associate human ships with attacks on their species.

It is important to monitor human activities to protect whales. This study reveals that we are still causing a tremendous impact on cetaceans, even if we rarely hunt them.

Whale Song
Whale song is one of the most fascinating mechanisms found in nature. This article will explain all about this mysterious form of communication. Read more »