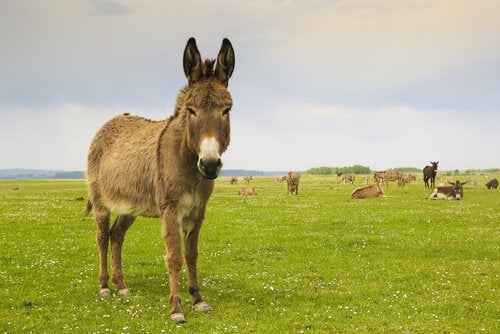 Donkeys are a cousin of the horse that are present in almost every part of the world and they’re used for carrying or pulling heavy loads. However, deep down inside, this animal is extraordinarily intelligent and docile. Continue reading this article to learn more about donkeys.

Donkeys belong to the equine family, which means that they’re strongly related to horses and rhinoceroses.

However, they’re the smallest species of the family. An adult donkey will normally reach a height of 90 to 140 cm, but certain breeds can get taller. For example, the Catalan Donkey is taller than 160 cm and weighs around 250 kg. They can live up to 15 -20 years, however there have been cases recorded of some living up to 40 years.

A donkey’s color can vary between all tones of grey, white, black and brown. Some breeds are completely white or black, but most normal donkeys are made up of one of these colors.

They have short pointy hair and large ears in proportion to their body. They can move their ears in many directions and use them to cool themselves down.

Current donkeys are descendants of wild donkeys that lived in Africa. They were domesticated around 6000 years ago when they began to be used to pull heavy loads. They’re tough, sturdy animals, capable of living in very hot environments with very little water, like the desert. However, they have a hard time living in colder climates.

Donkeys are herbivores and eat a much vaster variety of foods than other herbivores. However, they prefer to eat grass, hay, and bushes. They really enjoy vegetables and require less food in comparison to other similar-sized animals.

They make good use of the water they get from all the plants they eat, which means they drink very little and no water at all from unclean water sources.

Donkeys are extremely docile and compliant. Almost all donkeys are used to carrying or pulling heavy loads, and doing a good job at doing it, despite normally having to do it in rough conditions or without any rest. They’re tough animals that can bear a lifestyle of work conditions that would be impossible for other animals.

Due to prejudice, the word “donkey” and “ass” have become an insult in many cultures.  However, in actuality, donkeys or asses are very sharp and intelligent animals.  Although they may move slowly and never seem to be in a hurry, they’re very smart and capable of solving complex problems. Additionally, they have a great memory, which enable them to remember places and routes after long periods of time.

Donkeys very seldom get angry, but out of self-defense, they can pack a pretty strong kick with their hind legs or even bite hard. However, this hardly ever happens, because they’re very docile and not aggressive or irritable.

They also have a reputation for being stubborn. The truth is when they don’t want to do something, it’s very difficult to change their mind. But this is because they’re very cautious animals when noticing danger while they are performing a task or following orders.

There are donkeys all over the world. The first were domesticated in North Africa, but due to their extraordinary character and strength, they’ve been taken all over the globe, especially to warm countries.

You can find donkeys in southern and western Europe, in almost all parts of Asia, and spread throughout Africa and South America. Half of all donkeys currently live in Asia, especially in China, Afghanistan, and India. In America, the countries with the most donkeys are Mexico and Colombia. As for Spain, they’re especially abundant in Andalusia, but they’re disappearing quickly.

It’s said that there are no longer any wild donkeys. Those that currently live in the wild are actually descendants from domesticated donkeys that were abandoned or have escaped and learned how to live without humans.

In Europe, especially in Spain, the donkey population is dropping into extinction. The four Spanish breeds are in danger. As seen in the news, many are victims of abuse or abandonment after several years of constant migration.  Therefore, refuges and sanctuaries are appearing to save donkeys. These organizations rescue, recover, and care for donkeys that have had a bad life, and they are intended to find them a better home.

Donkeys are sturdy, intelligent, and exceptional animals. They’ve spread all over the world due to their strength and docile nature. Thanks to them, many cultures use donkeys for stories, sayings, and fables.