Learn About the Pheasant's Domestic Breeding

Coming from Asia, there are 30 subspecies of this bird. It is highly coveted for its meat, considered a delicacy. It's offered by luxurious restaurants and can be found for sale as game deals as well as for its eggs, and even as pets. 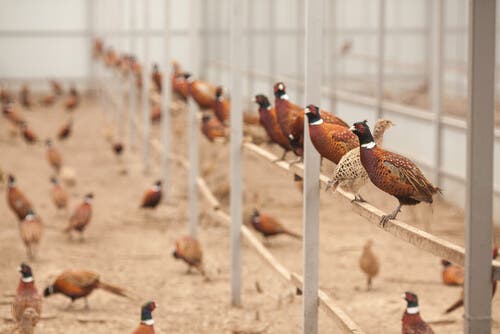 The pheasant is a species of bird native to Asia. Many years ago, this was one of the favorite birds for hunting practices. Over time, this animal has been gaining in popularity for being part of an important gastronomical dish. This is why today the pheasant’s domestic breeding is becoming very common.

After these birds left Asia and spread throughout the world, pheasants became endangered. However, it was thanks to the mix with other races in other countries of the world that pheasants managed to survive. It’s exactly because of that crossing that there are a lot of types of pheasant today.

Characteristics of the pheasant

Physically, the pheasant is characterized by its medium height, colorful plumage, and the length of its tail. However, the head is proportionally smaller to the rest of the body.

These birds are dimorphic. This means that there are noticeable differences in the genus. Males differ from females because they have the most colorful plumage and longer tails.

When the common pheasant came out of Asia and mixed with other bird species, a total of 30 pheasant subspecies emerged. We can distinguish them mainly by their plumage and the intensity of their colors. In addition, they also differ in that certain subspecies of pheasant only inhabit certain places and countries.

The wild pheasant lives in meadows, forests, and fields. It’s used to living in very spacious areas where it can enjoy flying freely. This is why, when it comes to raising them, they need to be guaranteed a big territory that they can feel comfortable in.

Domestic breeding experts say that each bird must have two square meters of space. It’s very important to consider this fact, especially if there will be high numbers of animal breeding. Pheasants like to hide and sleep up in the trees, so the best environment to raise them would be in a caged area, but with natural vegetation and trees.

These birds feed on plants and some animal organisms. Among other things, they eat seeds, nuts, leaves, lizards, snakes, and some small animals. Breeders often feed them industrial products also used for turkeys or chickens.

We should note that when pheasants are in their “chick” stage, they should be given very meticulous care since they can’t control their body temperature.

When breeding pheasants, it’s vital to have the right machinery, especially when the birds are still only chicks. If the reason for breeding is to sell them or their eggs, then incubators are a necessity. Other very useful items can be spacious outdoor cages and infrared hoods.

Benefits of breeding them

Currently, people raise this type of bird in order to sell them, due to their sought after meat. We can find it in luxury restaurants around the world. However, another reason for breeding them is the sale of their eggs. There are entrepreneurs who also raise them and then sell them to hunting businesses, and we mustn’t forget those who prefer these birds as pets.

Would you consider having a pheasant as a pet? We hope you enjoyed learning about how to breed them and what people breed them for. See you next time!

Quail breeding has become increasingly popular in recent decades. Although they’re intelligent and sociable animals, they require a lot of…

Anyone with chickens should know that it's perfectly possible to improve the quality of chicken eggs. Some breeds of laying…

Chickens and Birds
All About Pecking Order in the Hen House