Many different species migrate every year, but birds stand out because of the incredible distances involved. 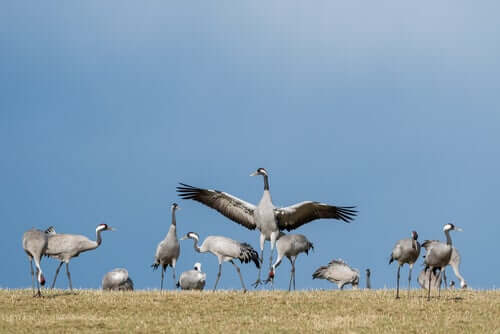 Animal migrations are one of the most fascinating things in nature. In particular, migratory birds stand out because of the tremendous distances they travel.

Migratory birds are normally not adapted to extreme cold and tend to travel to warmer regions during the winter months. Many different species do this, and, today, we want to tell you about six of them.

Not everybody knows it, but the common crane (Grus grus) is one of the furthest traveling migratory birds. This species breeds in northern Asia and Europe and then spends the winter in the milder climates of southern Eurasia and even Africa.

As a result, they breed in swamps in cold countries like Ukraine, Finland, Sweden or Russia, where there can be up to 100,000 of them. Then, when summer ends, they migrate to North Africa. However, many remain in southern Europe, particularly in Spanish lakes like Gallocanta.

During migration, up to 400 of them can gather together. However, once the migration is over, they tend to separate because they’re not very sociable animals. This migration has taken place for millennia and is mentioned both by Aristotle and in the Bible.

As a result, they breed in swamps in cold countries like Ukraine, Finland, Sweden or Russia, where there can be up to 100,000 of them.

The swallow is one of the smallest migratory birds and they usually live on open ground, settling in barns, stables and even houses.

They breed throughout the Holarctic, which is virtually all of Eurasia and North America except deserts and the most northerly regions. Unlike their relative, the common housemartin, they’re much more common in rural areas.

The bar-tailed godwit (Limosa lapponica) is a unique bird with a needle-like beak. It’s one of a great number of waterfowl species, but when it comes to migration, few come close to the distance it travels.

The bar-tailed godwit is a record-breaker. There’s no other migratory bird that will travel 6,800 miles without stopping, flying from Alaska to New Zealand. As a result, they gain a lot of weight during the months previous to this, so that they can endure the long journey (the same thing happens to salmon). They will fly for more than a week without stopping.

This is a sea bird that breeds in the Arctic. The journey of these migratory birds is legendary and it’s the longest regular migration that exists in the animal kingdom. They cross practically the entire planet to get to Antarctica.

The whole round trip adds up to nearly 50,000 miles and two summers each year. As a result, they’re practically always in perpetual daylight.

The Arctic Tern crosses practically the entire planet to get to Antarctica.

This species is founded throughout the Atlantic, Pacific, and southern Indian Oceans. When the mating season ends, around April, they then make a circular migration to the subarctic waters in summer.

They migrate individually and can travel up to 560 miles per day. Theirs is not the longest migration route, but it still adds up to some 14,000 kilometers.

Some that travel from Alaska to New Zealand travel more than 43,000 miles. If we consider that this species has a lifespan of about 50 years, this means that some birds will migrate nearly five million miles during the course of their lives.

This is an aquatic bird that lives in the Arctic. Their migration route isn’t completely exact, but it seems that during summer in the southern hemisphere, they travel to Tierra del Fuego (near South America), where they rest and feed for a few months.

This species has broken several records and is one of the most fascinating birds around. After more than 20 years of bird ringing, this bird has traveled the same distance it would take to fly to the moon. Although other species are estimated to have traveled longer distances, the record set by B95 (one individual red knot) is the furthest recorded in history.

It’s a Hard Life for the Emperor Penguin!
The emperor penguin is a member of the Spheniscidae family, is the largest one of it and also the most common one in popular culture. Read more »
Link copied!
Interesting Articles
Birds
Discover 5 Different Types of Owls