The Salmon Run - An Amazing Journey

The Columbia River Basin once had part heading toward the ocean and salmon returning to their home rivers and streams to spawn. However, many of those species are now extinct and some are currently endangered. 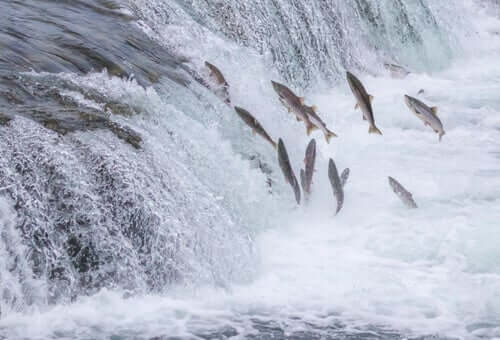 It’s common for wild animals to migrate and among the many species who do so, the salmon run is one of the most impressive natural events. This is because of the distance they cover and the huge effort they make.

Salmon can inhabit both fresh and saltwater, in other words, they can thrive in a river or in the sea. In fact, few fish species can alternate habitats this way.

So, salmon leave their native rivers when they’re ready, which usually happens after their first year of age. To do so, they undergo a series of behavioral and physiological changes, as well as a considerable increase in size. They then embark on an incredible journey in every way.

Several species of salmon travel extraordinary distances. In the case of Atlantic salmon, those born in various countries such as Spain, the UK, and the USA travel thousands of miles towards the Greenland sea.

Despite this, the Yukon River records the longest migration of salmon. The sockeye salmon can travel more than 1864 miles from the Bering Sea to the beginning of the river.

The salmon reach the sea after leaving the river when they’re one year old. Once they’re in the ocean, their diet consists of small crustaceans, although they also eat other fish such as mackerel and herring. Some of them can weigh about 7 pounds, although some may reach 14 pounds after their second winter.

The difficult return of salmon

After two or three years, they begin to spawn. The males “dress up” in bright colors, to signal females that they’re ready to mate.

During their return, the salmon travel towards their native river — they can recognize the tributaries and rapids where they grew up. Note that all the factors that impact this incredible skill are still unknown. Unfortunately, it seems that climate change is affecting their ability to do so, disorienting the salmon who end up in different rivers. This is one of their main threats.

There are several theories about the salmon’s great sense of direction and there’s talk about chemical and olfactory signals they can perceive. Others argue that it’s the influence of magnetic fields, which some animals can sense and follow.

Once they arrive at their final destination, the females make holes in the river bed, where they deposit their eggs in a sort of nest — they’re oviparous animals. Afterward, the male fertilizes them, and hatching takes place after a month or so.

The salmon run, a bittersweet journey

Unfortunately, human intervention and ecological deterioration make it hard for them to return to their place of origin. The construction of dams is one example as it keeps the salmon from going up the river. So, the salmon go astray when this is the case and colonize new sites.

In other instances, some animals take advantage of the salmon’s efforts. The Alaskan bear, for example, which is one of the most iconic species of bears. They wait at the waterfalls of the rivers during the fish migration dates to wait for the impressive jumps of the salmon in order to catch them in the air.

The migration is exhausting, and a huge percentage of salmon only do it once in their lives as they die after spawning their eggs. Survival is only common in some species like the Atlantic salmon.

This is due to the fact that these fish don’t eat during their trip. This is because they use all their energy reserves during the salmon run, even those accumulated in their muscular tissues.

The Sardine Run – The Greatest Show on Earth
The sardine run natural phenomenon is, without a doubt, one of the greatest shows that nature can offer us. This migration is the largest one ever recorded. Read more »
Link copied!
Interesting Articles
Fish
Different Types of Water for Your Fish Tank