Bear Species - The Eight Most Common

There many bear species within the family Ursidae, and today we'll tell you about them. 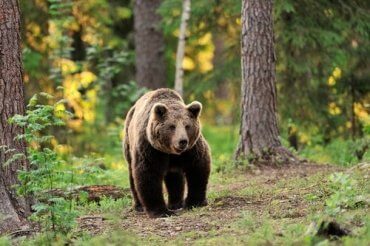 There are many bear species and these animals are among the largest in the world. Most are omnivorous — with the exception of the polar bear, who’s 100% carnivorous, and the panda who’s herbivorous. Also, their degrees of aggression vary. In today’s article, we’re going to tell you about the most common ones.

How many bear species are there?

The Ursidae family has a large head, ears, small eyes, and a short tail. They also have very heavy bodies, powerful jaws, and walk fully supported on the soles of their feet. They have five claws on each leg.

Bears can weigh up to 1800 pounds and have a thick fur, often of a single color. They mainly inhabit Europe, Asia, and America. The 8 most common species of bears are:

Their appearance is different from other bears because they’re two-toned: white on the belly and back, and black ears and eyes. Their heads are rather large and they seem chubby. In addition, they have very strong jaws with which they can break bamboo stalks — this plant comprises most of their diet.

This kind of bear has a thick fur to maintain their body temperature during the cold winters of Central China, their place of origin. In their natural state, they spend a lot of time alone except when the females care for their young. This is not a territorial animal and can spend the entire day eating and sleeping.

These bears’ funny name comes from their unusual looks.. This is because the hair on their face is different from the rest of their body. They may have white or gold rings around their eyes. Their fur is dark and they’re thin-skinned because they’re originally from an area with high temperatures in South America.

These bears are small in comparison to the rest of the Ursus genus. They can climb trees thanks to their long claws and these are their favorite places to find food and a place to rest. They’re also they’re very shy animals and don’t hibernate. They’re omnivorous and begin to reproduce around the age of 4.

This kind of bear is the smallest of all and has brown fur with yellow-orange spots under their neck. Their hair is short and straight so that they can adapt to the lowlands where they reside. Their tongue is very long and they use it to extract honey or insects from the caves. They mainly inhabit Southeast Asia and Northeast India.

They’re great at climbing trees and enjoy resting in the sun during the day. However, they’re quite active at night and don’t hibernate. Because of that, their reproduction can happen at any time of the year.

Also known as a labiated bear, this one is very easy to identify since they have a lot of dark hair with some lighter parts – on the snout, for example. They don’t have large front teeth so they suck up ants and termites. This kind of bear mainly inhabits Central Asia and lives in small groups that consist of a handful of adults and their cubs.

These bears sleep during the day and look for food at night. Generally, they don’t hibernate, although they spend a lot of time inside their caves during the rainy season.

These bears are large, dark and have thick skin. They inhabit the mountainous terrain and forests of Asia. In addition, they spend many hours on top of trees and not all of them hibernate in winter. Pregnant females retire from November to March and prepare their burrow in October.

They’re omnivorous and mainly eat fruit, nuts, and berries. Finally, they mate in the middle of the year and produce about two cubs in each litter.

This is one of the most popular species of bears because they live in the current National Parks of the USA. Their fur could also be brown, in spite of their name. This animal is very fast and has a bigger head than others and also a more robust complexion. Their sense of smell is about 7 times more acute than a dog’s — or so they say. They’re also more active early in the morning.

Not all of these bears are brown and their fur can be of other colors such as yellow and black. These animals are large and their habitat is the widest of all as they may inhabit Asia, North America or Europe. However, Alaska has the largest population. This kind of bear prefers to be alone and it’s mostly nocturnal. In addition, they hibernate in winter and are quite picky when it comes to their food.

In addition to being the only white bear, this is also the only bear species that exclusively eats meat — mostly seals – due to their location in the Arctic region. These bears are huge and have abundant fur and can spend many hours in the water. In fact, they can swim several miles non-stop. They seem a bit awkward when they walk on their hind legs but are actually quite intelligent. Finally, they reproduce every three years and can survive off their fat reserve.

What Are the Differences Between Brown Bears and Grizzly Bears?
Both brown and grizzly bears have such similar characteristics that we often don't know how to distinguish between the two. FInd out how to today! Read more »
Link copied! Next
Interesting Articles
Mammals
Characteristics, Behavior and Habitat of the Colobus

Mammals
All About Affectionate Behavior in Otters

With a primarily solitary nature, the affectionate behavior in otters centers basically on the relationship between mothers and their pups.…