Polar bears are considered to be a vulnerable species, with sea ice loss as one of the primary reasons for this. Learn more about these fascinating and incredible animals in this article. 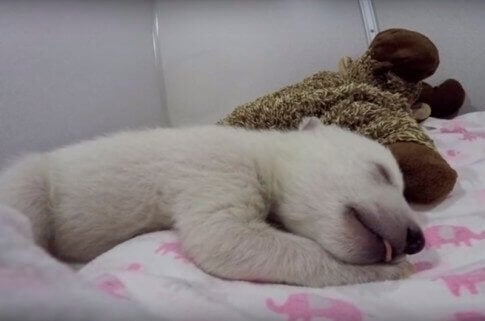 We normally go crazy about cute puppies and kittens here on My Animals, but today it’s a gorgeous polar bear!

This bear’s first baby steps have amazed social media, and who could resist it? Let’s get a good look at some interesting facts about polar bears, before having a look at the animal itself.

The Polar bear, a special and unique animal

The polar bear is an animal that gets everyone’s attention and admiration. Their imposing presence, the purity of their white fur and funny gestures make them an animal that few people could say they aren’t a fan of.

In addition to all of that, there are 4 interesting facts about them that we want to share with you.

They can swim for a week without rest

Very few animals have the ability to stay in the water for so long. Polar bears don’t just dive in and stay there, they can swim for a whole week without rest! Even without any sleep or food – it’s unbelievable!

In addition, they’re said to be able to swim between 20 and 60 miles non-stop. However, there have been cases found where they have swum almost 190 miles in special situations.

An example of this is when the sea ice melts and they can’t find any solid surface to stand on. Perhaps this was the case of a female specimen who swam for 9 days straight with her baby on her back. That’s a total of 425 miles!

If you think about very large animals, almost all of them are herbivores, such as the elephant. However, the polar bear is carnivorous and its large size makes it the largest carnivorous mammal on earth.

This is because a polar bear can reach a height of 10 feet and a weight of 2000 lbs. In fact, it’s said that they could break our bones without much effort at all.

Their liver could kill you

Unfortunately, there are still some Eskimos out there who hunt them for food. They use all the parts of the animal except the liver. Why? Because their liver contains a high content of vitamin A that has terrible effects on our body. Some of these effects include peeling skin, vomiting, bone pain and irritability.

This seems like an illogical statement since even a child would say that polar bears are white. However, the hair color of polar bears is actually colorless! As a result, this allows all the flashes of light to be reflected on it and give the purest of all colors: white.

As we promised you earlier, here’s the cutest polar bear on social media. It was born at the Toronto Zoo in Canada and has become famous after his caretakers recorded him trying to take his first steps.

The zoo workers wanted to help him get used to his habitat and took him outside, put him on the snow and let him start walking.

The noises he made, the difficulty he experienced and his innate beauty made this video go viral in a matter of hours. Because of this, we’re sharing the video with you so that you can understand what we’re talking about. Enjoy it!

Dogs That Look Like Bears!
Not all animals look like what they are. We'll tell you all about breeds of dogs that look like bears and why you might want one! Read more »
Link copied!
Interesting Articles
Reptiles
Boa Constrictor: Characteristics, Behavior, and Habitat