For cats, their sense of smell is key to their survival, and is 14 times stronger than that of humans. 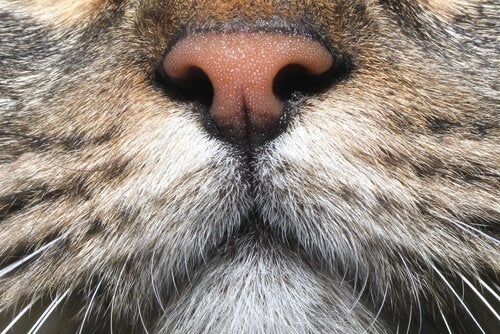 If you have pets at home, you must have already noticed how they smell everything around the house. It’s their way to understand the surroundings! A cat’s sense of smell is very important for them, which makes it a useful subject to learn about if you have a cat at home.

Facts about a cat’s sense of smell

Believe it or not, a cat’s sense of smell is 14 times stronger than that of humans. This is because their nasal organ is bigger than ours and is more developed.

Smell is one of the most vital senses domestic felines have. A large part of their survival depends on it; they use smell in order to identify food, relatives, dangers, territory, mating partner etc.

Cats have about 12 million cells in their nasal cavities, which have a vomeronasal organ at the top of the palate. Have you ever seen your cat opening her mouth as she sniffs an object? It’s not that she’s smiling, it’s that she’s doing her best to bring all the molecules of the aromas to the most sensitive organ they have. This is known as the Flehmen response.

In addition, a cat’s sense of smell is special because a large part of their brain is focused on identifying odors. They use the information captured in everyday life.

As with other animals and even people, felines keep information about what smells good and what smells bad. This allows them to know when it’s safe to get closer or when to get away as fast as they can.

How do cats use their sense of smell?

As we’ve already said, a cat’s sense of smell is primordial in their life. In other words, it has a fundamental role in everything that the animal does (or doesn’t do). The main uses cats give to this sense are:

Cats are initially blind when they’re born, and they need to eat while their sense of sight is still developing. However, the sense of smell helps them to find their mother and her mammary glands to feed on the milk.

The moment the kitten finally opens its eyes, it still uses smell to find which kinds of food are good for it and which isn’t. It also allows them to find food in unlikely and otherwise inaccessible places.

In order to reproduce, female cats emit a special pheromone when they’re on heat. This ‘perfume’ can be identified by males at a distance. In addition, smell allows them to know when there are other cats around and if they’re dangerous or friendly.

Male cats mark territory through urine; they release hormones into the air and warn other cats not to come near. If the smell has faded due to the passage of time, the wind, rain, or other actions (cleaning, for example) then they will mark their territory again.

In order to recognize if something around him isn’t quite right, a cat uses his sense of smell. How? It opens his nostrils wide, prepares his whiskers and lifts the ears straight up. This way, he can tell if there’s a dog nearby, a person who doesn’t love animals, a toxic substance, etc.

If you have cats at home, you’ve probably experienced how they rub their heads on your legs or hands. This isn’t a sign of affection, they’re leaving their scent on you. The same goes for their toys or those objects they consider personal such as your bed, for instance.

This way when another cat wants to get close, they’ll know that you ‘belong’ to them by smelling the scent they’ve left on your clothes or on your body.

In conclusion, we know the sense of smell is essential for your cat’s life. Because of this, we recommend that you help them take care of it. For instance, you can avoid using strong cleaning products. You can also prevent them from being exposed to the sun at noon for too long – that way their nose will be in perfect shape! 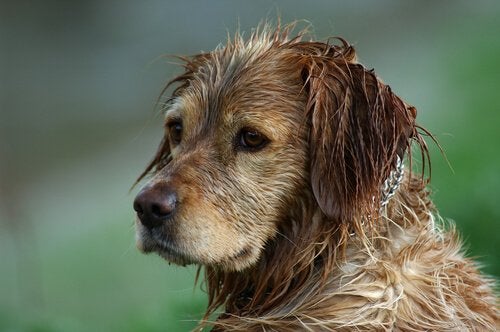 How to Get Rid of Wet Dog Smell
A dog that spent the afternoon running in the mud may arrive home with an almost intolerable smell. That famous "wet dog smell" is natural and you can get rid of it. Read more »
Portugal, M. T. M. (2006). Receptores de feromonas de mamíferos: Supervivencia y sexualidad. Anales de La Real Academia Nacional de Farmacia.
Interesting Articles