The most representative species of this religion is the cow. In fact, they are so sacred that they are considered part of the family. Neither do they eat them, despite the poverty in India. People believe in reincarnation of animals. 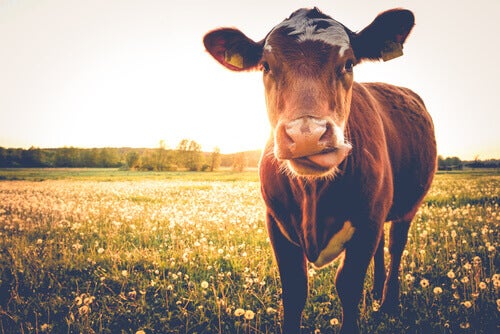 Each religion has a different relationship with the other beings that inhabit the earth. However, some animals in Hinduism have a sacred quality. In this article, we’ll tell you a little about the beliefs of Hindus in relation to fauna.

Animals in Hinduism: Talking about spirituality

According to the sages who lived in ancient India, all living beings in the world have a certain degree of spirituality. As a result, songs and rites included in sacred books speak of various animals: turtles, fish, horses, and pigs, among others.

In their holy scriptures – known as the Vedas – there is a quote that states: “By not killing any living being, one becomes fit for salvation.” Keep in mind that Hindus believe reincarnation is how people live eternally. Depending on how they act in this life, they will either enjoy or suffer in the next.

Another teaching that demonstrates the relationship with animals in Hinduism is the following: “You must not use your God-given body for killing God’s creatures.” No matter what, violence never leads to good things, just the opposite.

It’s surprising to many that in a country as poor as India – where most people who practice Hinduism live – cows walk the streets and nobody dares to kill or eat them. This is because they’re a sacred animal. In fact, Hindus believe that if they consume cow meat, they will awaken their god’s anger.

Some people call cows the “mothers of humanity” because they supply milk to their children and humans as well. Mothers offer food to their young without expecting anything in return. As a result, Hindus compare the death of a cow to that of a parent. No one would harm the person that gave them life because it’s sacrilege.

In addition, these mammals are considered family members. People care for them as if they were children. They pray for them when they get sick and celebrate a calf being born with a party. In fact, they invite neighbors and friends.

Dairy cows are called “aghnya” which means “not to be killed.” However, in ancient times, some families sacrificed sterile bulls, male or female calves to feed themselves.

This has changed since then. In Hinduism, there is a teaching that says: “God is present in all beings.” As a result, you can’t kill a cow – or any other animal – because it would be the same as killing a part of their god.

Animals in Hinduism have lots of symbology. Many of them represent gods on earth. Therefore, practitioners of this religion don’t harm or hurt them in any way; in fact, they venerate them. Three examples of other sacred animals are:

In Hindu mythology, one of the greatest deities in Ganesha, who is shaped like an elephant. Legend says that in the past the first elephants had wings and flew towards the clouds. When a saint asked heaven to remove these animals’ wings, they accepted the request. However, in return, they were given huge ears that unfortunately don’t allow them to fly (with the exception of Dumbo).

People also believe that elephants have the ability to ask for rain to come by moving their ears. As a result, people revere elephants in India. This is especially true of white elephants, who are a symbol of good luck.

This is the national bird. They are related to wisdom and beauty, as well as a form of transportation for Kartikeya, the god of war. The deity sat on the back of peacock with his wives. Also, in various depictions, you can see them destroying snakes.

These animals represent Shiva. They’re related to strength and power, as well as humility and wisdom. According to ancient myths, a group of monkeys saved the king’s wife – the god Rama. In gratitude, he gave them the appearance of a deity.

The Role of Elephants in Civilization
The role of elephants in civilization varies but it goes way back to time immemorial. There's evidence from 4500 years ago of elephants in captivity. Read more »
Link copied!
Interesting Articles
Cows
The Belgian Blue and Its Muscular Appearance

Today we'd like to tell you about one of those words that's quite familiar to everyone. However, you may not…