This reptile is featured in many myths of ancient civilizations and as a symbol in Christianity. However, nowadays these reptile are often mistreated for the erroneous belief that they are dangerous. 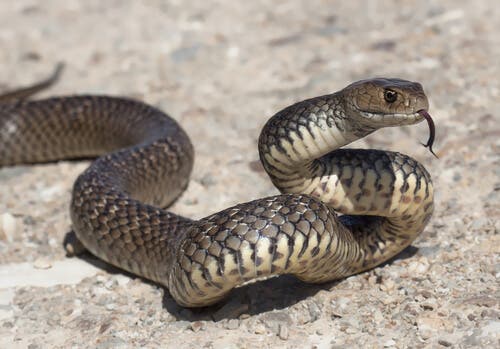 Many animals have shaped our history as symbols. Snakes in ancient cultures are one of the best examples. While some people hate or fear these creatures and others love them, it’s hard to find someone that’s indifferent.

The idea of snakes as pets has changed over time. For example, many cultures, such as the Egyptians, chose to live with these divine animals. Snakes even have a major role in the great myths of ancient Egypt, such as the death of Cleopatra.

According to some religions, such as Christianity, snakes are one of the forms of Satan. In fact, Adam and Eve were expelled from paradise after a snake tempted them with the forbidden fruit. You can also find saints and virgins overpowering snakes in Catholic scripture.

Despite this, there are other very different connotations in Christianity and in other cultures regarding snakes. For example, the staff of Moses is represented as a snake with a special, miraculous connotation. In addition, some people interpret the snake in the myth of Adam and Eve as a representation of the origin of knowledge.

Snakes for Egyptians and other cultures

For the Egyptians, snakes had various meanings. For example, the goddess Wadjet is represented as a cobra. She is the protective goddess of Lower Egypt. She also can use fire to protect her territory and is a deity. Myths say that the fertility and the productivity of soil depend on her.

Snakes also represent Apophis, the embodiment of chaos. This deity was the enemy of Ra, the bringer of light. However, the truth is that ancient Egyptians revered snakes because without Apophis and his snake form, the night would never come.

Additionally, if we look at the Sumerians, serpents also appear related to eternal life in the famous poem about Gilgamesh.

One of the most shocking appearances of snakes in ancient culture is Ouroboros. This is a snake that eats its own tail. It represents various concepts, such as the cycle of life.

You can find snakes an ancient symbol in cultures as different as ancient Egypt, Greek, or Nordic. For example, in Norse mythology, Jörmundgander is a colossal serpent that controls the seas and is the eternal enemy of the god Thor.

Snakes are a strong sacred component in Hinduism as well. Siva is one of the most important gods of this religion and is often represented as a cobra.

In Asian culture, snakes have a place in astrology and martial arts. Many monuments feature these animals. Also, in a similar way to snakes in ancient cultures elsewhere in the world, snakes are intertwined with the myth of dragons. In China, Nüwa and Fuxi are deities with snake tails. They are also said to be the creators of the human race, wisdom, and writing.

In the American continent, people have viewed snakes as symbols for a long time. For example, one of the greatest deities of the Mayans was Quetzalcóalt, the “feathered serpent.” This was probably the most important god. Several pyramids and monuments also feature this god. Amaru is another deity from ancient Peru; this deity is a winged snake.

On the American continent, snakes in ancient cultures have played a major role in mythology.

In Greek mythology and later in Roman mythology, Asclepius or Aesculapius is the god of medicine. His staff appears surrounded by snakes. In fact, this staff has become part of the common symbol of medicine, which features snakes. Also, Romans used non-poisonous snakes in healing rituals.

The Greeks created the basilisk. This was a large snake that petrified living things with its gaze. This creature inspired numerous myths in other cultures, and J.K. Rowling also used the basilisk as a villain in the famous Harry Potter series.

Unfortunately, despite the fact that many cultures revered these animals, people don’t view them favorably today. In fact, the numerous present-day myths about their dangers cause people to persecute and abuse them. The truth is that many snakes are not dangerous. We should simply let them live in peace.

Do Rattlesnakes Use Their Scales to Store Water?
Different types of snackes have adapted to their surroundings. With that in mind, we're going to look at how rattles snakes use their scales to store water. Read more »
Link copied!
Interesting Articles
Reptiles
Asian Water Monitor: What Does it Eat?