There Is a Snake in the Garden: What Should I Do?

These reptiles are harmless. They will not attack as long as you don't corner them or step on them. These animals usually flee from people. 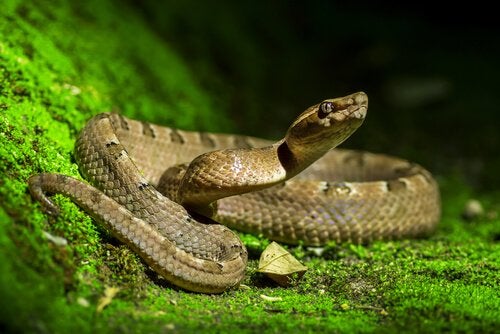 Most animals become more active in the spring, especially some reptiles such as snakes. That is why it is common that around this time, a snake may appear in the garden or even in the home.

Snakes can get occasionally trapped by man-made structures, such as pools and ponds. That is why the snakes that you find will need you to help them and not fear them.

The truth is that snakes are not a danger to man. So, you must act with the caution and respect that a protected animal deserves.

What do I do if there is a snake in the garden?

To begin with, you must ensure that you act calmly. It’s recommended that you be careful even though snakes are not dangerous because they’re very sensitive to the tremors of the ground and this can make them stressed.

If there is a snake in the garden, you must not lose sight of it. Rather, you must know where it is at each moment. This is not because they’re dangerous, but rather to control the animal. This way you can pick them up and tell the authorities, some organization or professional where they’re located.

Identifying a snake in the garden

Few snakes on the Iberian Peninsula are poisonous, but some of them are. For this reason, it’s a good idea to know how to identify these animals. It’s especially important to know how to tell the differences between constrictors and vipers because vipers are venomous.

It’s really important that you identify the animal before touching it. This is because the dangers of handling these animals depends on the type of animal it is.

In order to identify a snake, we recommend that you reach out to herpetology groups in social networks. They usually can provide you with an answer in a short amount of time. It’s important to get the opinion of several people before you risk handling the animal.

Who do I call if there’s a snake in the garden?

The best thing to do is call a herpetology association, 911, animal control services or any local environmental agencies. If none of these options are available to you, and you have identified that the snake is from a non-dangerous species, you can rescue it yourself.

If you live nearby, you can also call recovery centers such as AMUS or GREFA, which even have recommendations for these situations. They will give you advice on how to act.

In case you get someone to help you, you must continue to watch the snake so agents can find it. If you must rescue the serpent yourself, you must direct the snake into a bucket or box with a stick.

Once you have done this, you can release it in an area with bushes or nearby forest. Alternatively, you could call animal services if you could not do it.

It’s only recommended that you do this if you have identified the snake correctly, when you see that it is calm, and when the animal is in danger. It is normal for snakes to live in your garden, and they can be part of their normal wildlife; although they are harmless, they can attack if you try to handle them.

A snake in the garden: protected animals

You must be aware that all snakes prefer to avoid humans. They only attack if they feel cornered and threatened, such as when you step on them.

In addition, all the different kinds of snakes on the Iberian Peninsula are protected species, so you can never attack them or disturb them intentionally.

When you find a snake in the garden, it’s common for them to be Montpellier snakes and ladder snakes. These snakes are harmless, although they can show aggression when they are handled.

Unfortunately, snakes are creatures that some people find scary. However, you must be aware that they don’t pose a real danger to humans, at least not in regions such as Europe.