The Seven Biggest Snakes in the World

In this very interesting article, learn all about the seven biggest snakes in the world. Read on to discover curious facts about them! 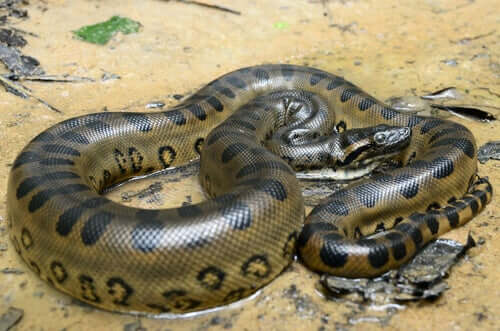 Many people don’t like snakes at all. Nevertheless, we all recognize that they’re incredible animals with abilities that many would like to have. In this article, we’ll be talking about the biggest snakes in the world, and you’ll be amazed at these beautiful creatures.

The biggest snakes in the world

Before starting our list of the biggest snakes in the world, we need to tell you something: if you see any of the snakes listed here, run!

This snake lives in South America and can grow up to between 13 and 18 ft long. While it’s true that other species may be longer, the green anaconda is on this list due to its weight, as it can weigh 485 pounds (220 kg) or more. In fact, to bear its own weight, this snake spends most of its time in the water.

This may be the longest snake in the world, with a length range of 4 to 21 ft. Some specimens have measured up to 31 ft. Can you imagine finding this snake in your bathroom?

This snake lives in the jungles of Southeast Asia. And, despite its size, it weighs less than the green anaconda. However, it had to make the list of the biggest snakes in the world.

The Burmese python lives in the same forest as the reticulated python. However, it’s somewhat smaller, since it only grows up to 19 ft long. Although it may seem small when compared to the reticulated python, have you ever thought about how long 19 feet is? That’s longer than a very long car! As we told you at the beginning, if you see one of these snakes, run as fast as you can!

It seems that pythons are the stars of this list. That’s why the African rock python just had to be featured here. This snake lives in Africa, as its name suggests, and feeds on goats, gazelles, and crocks, so you can imagine its size! It’s almost 26 feet long.

Anacondas are said to come from this species, which apparently lived 60 million years ago. There are indications that this snake was more than 39 feet long and that it may still exist today. If this were true, it would certainly be at the top of this list.

This would be the second snake on the list after the Titanoboa. However, there’s evidence that this species became extinct about 40 million years ago. This species came from Egypt and Libya, and measured between 36 and 52 feet long.

Its weight is even more remarkable, as it weighed up to 1543 pounds (700 kilos)! This is why it’s strongly believed that this species spent most of the time in the water because it would be impossible for it to crawl due to its weight.

This snake is from Australia. It would be behind the Gigantophis garstini on this list, as it’s nearly 22 feet long and weighs nearly 220 pounds (100 kilos). Despite not being the first on the list, this snake is able to swallow animals bigger than itself.

What did you think about our list of the biggest snakes in the world? Would you dare to have one of them as a pet?