Excessive eating or poor diet, ingesting contaminated water with high levels of limescale, and even parasites, can cause horses to suffer from colic. You have to be careful because the mortality rate is very high. 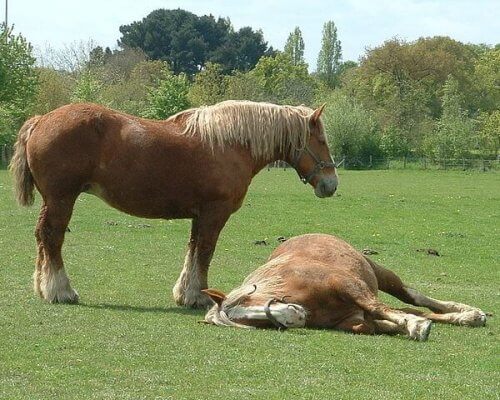 Colic in horses, also known as acute abdomen syndrome, is a very common disease that concerns many horse owners. Knowing when the animal is suffering from it, and how to remedy it, is vital for its survival.

What is colic in horses?

Equine colic is an acute pain that causes seizures in the stomach and intestines, which creates severe discomfort in the animal. If it’s not treated quickly, the animal could die.

So much damage can be done to it, and so quickly, that it’s treated as a veterinary emergency. So, now we know what can happen, let’s see what the most common causes of colic in horses are.

It’s said that colic in horses is more a syndrome than a diagnosis itself. This includes many diseases of the digestive or intestinal tract. However, the main known causes are:

So that you can act quickly, you need to know what the symptoms of colic in horses are. Although this syndrome has a high mortality rate, it can be alleviated by acting fast. Most colic deaths happen because the owners of the horses haven’t acted with enough haste to one or more symptoms.

Treatment of colic in horses

If you think your horse has colic, walk with it. This isn’t a cure, but it’ll distract them and prevent them from thrashing on the ground causing intestinal torsion.

Because of their physical complexion, horses can’t vomit. There is a risk of death from colic. The stomach grows and can burst inside the animal. Therefore, walking will prevent them from being hurt and give you time to take it to the veterinarian, who will administer pain relief.

Mineral oil will be given through a tube to lubricate the digestive system and as a laxative for the animal to expel everything that causes damage. The horse won’t need to eat until the vet gives their approval.

The best thing for colic in horses is to prevent it. Therefore, watch your animal and everything it eats, as well as any changes in its behavior. Animals are always a responsibility.

Headshaking Syndrome in Horses – Causes and Treatment
Headshaking syndrome in horses is a behavioral disorder that manifests as motor tics. Today we'd like to tell you about this type of manic syndrome. Read more »

In the town of Wellingborough, Northamptonshire, England, severe flooding often occurs after rainy periods. So much so that the City…

Horses
The Care and Treatment of Horses with Scabies

Scabies is an infectious disease caused by mites, and it affects many different mammals, including humans. However, we're not their…

Horses
A Pregnant Mare: What You Need to Know

A pregnant mare requires special attention and care to ensure that both it and the fetus stay healthy. Generally, you…

Horses
Most Common Diseases in Horses

Horses are herbivores that have lived on Earth, according to experts, for over 50 million years. There are more than…