Equine Communication: The Language of Horses

You may think that horses aren't as expressive as other animals. However, the truth is that there are certain gestures that encourage communication among this species. Discover more about the language of horses. 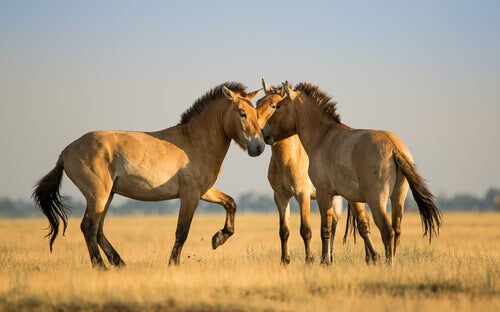 While we share our lives with many domestic animals, we’re unaware of some of their characteristics regarding intelligence and ethology. For example, the language of horses is much more complex than you may think. What’s more, it demonstrates the great intelligence of these creatures.

We’re used to knowing a great deal about the relationship between horse and rider. However, horses have, by nature, a very intense social life among themselves as well, which is based on a nucleus of individuals that have strong affective bonds. We can still observe this today in the wild among the Przewalski horse, which appears in this article’s cover photo.

Horse herds display a harmonious behavior that undoubtedly demonstrates an effective and fluid communicative capacity, allowing them to anticipate the behavior of the rest of the group.

The importance of the body in the language of horses

It’s true that body language is very important in horses. In fact, it’s impossible to talk about the language of horses without talking about the importance of physical contact and body language.

Horses use a lot of physical contact with each other, through rubbing and light touches with the head. The position of the neck and head is also important, and the greater or lesser bowing of these body parts can indicate situations of alert or boredom.

The horse’s tail is also a very expressive part. Unless the horse is trying to flick off flies, then sudden movements of the tail can be an indication of nervousness and irritation. At the same time, if they keep it low or even between the legs, this may indicate fear or submission… Just as in dogs.

Horses are also very expressive with their mouths. In that sense, retracting the lips and showing teeth and gums indicates a threat or that you’re dealing with a frightened horse. The animal may even bite at the air. On the other hand, droopy lips indicate relaxation.

In general, the whole attitude of the horse will give us a reflection of its state of mind. If it stretches out its head to sniff or lick you, it indicates that it’s relaxed and curious. However, if it turns its back and whinnies, we should move away.

Speaking the language of horses

Incredible as it may seem, humans have managed to understand something of the language of horses. Or at least that’s what Native Americans achieved when they had contact with the untamed horses in the far west.

Thus, the Chickasaw people managed to speak Equus. This language was based mainly on signs and some vocalization and took into account the horse’s own communication.

In fact, Native Americans taught this form of language to many settlers. Therefore, some of the traditional signs of American dressage come from this language between horses and humans.

Ears are the key to the language of horses

Recently, a study has shown that one of the most important forms of communication for horses is the movement they make with their ears. It has been shown that horses are even capable of pointing out things of interest with the movement of their ears.

One of the things that horses observe the most from other individuals of their species is the expression of their eyes and ears. This is an interesting point, since, people previously thought that body position was much more important. In fact, experts ruled out that a horse’s glance was of any interest when it came to communication.

In order to discover this, researchers filmed horses’ faces along with vocalizations and body movements. As a result, they discovered that, without the information provided by the face, it was difficult for other horses to understand the message conveyed.

Thanks to their work, an equine dictionary has been created. It’s still in development, but could end up deciphering the language of these amazing animals.

Tips on Taming a Horse
Taming a horse can be a long, difficult process. In this article, we'll give you all the information and tips you'll need to help you! Read more »
Link copied!
Interesting Articles
Horses
Learn How to Ride Horses