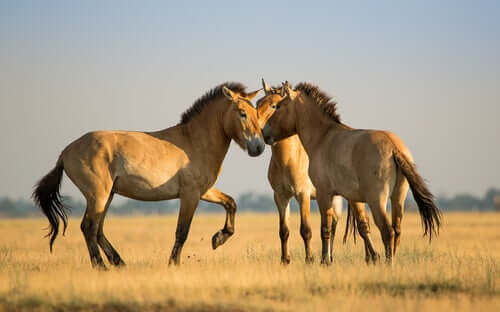 Horses became extinct in America thousands of years ago. Nevertheless, during the Spanish conquest, various Spanish horse breeds arrived on the continent. The American plains, where there are no large predators such as the wolf, bear or big cats, allowed its proliferation.

Przewalski’s horse is also known as the Mongolian wild horse. Even though it was on the brink of extinction, today it survives as the only horse breed that humans haven’t domesticated at all.

This fact allows it to be an ideal study model for horse behavior. Scientists say its temperament and social structure are probably very similar to that of the domestic horse’s ancestors. This in itself gives multiple applications for equine ethology and natural dressage.

Archeologists have found fossils of the evolutionary ancestors of the modern horse in many parts of North America. Some studies say they became extinct around 10,000 years ago.

Unlike domestic horses, the Mongolian, or Przewalski’s, wild horse has a distinct skull, with a convex instead of a concave-shaped nose. This horse has a solid build, short legs and a larger head in relation and proportion to its body.

The hair on its mane is straight and thin, and its coat can show yellow and dark brown coloring. In addition, the adult horses of this species can weigh around 770 lbs, and can be more than 6.5 feet long.

Przewalski’s horses are a very sociable species that live in large herds led by a dominant male. When the horses reach two years of age, they usually tend to leave the group.

Females eventually settle into other herds and males attempt to snatch power from other stallions, encouraging genetic exchange between members of the species. The character of a Przewalski’s horse is brave and, although they won’t attack without a reason, it’s impossible to tame wild specimens.

As for feeding, this species feeds mostly on grass as it lives in meadows. Its main predator is the wolf, although its greatest threat is the human being and the impact it generates on the Mongolian horse’s habitat.

Przewalski’s horses are a very sociable species that live in large groups, led by a dominant male.

During the Pleistocene, Przewalski’s horse lived in Asia and its European counterpart, the Tarpan, lived in Europe. This species is behind the origins of domestic horses. For millennia it had no threats, but hunting and competition with livestock put it in serious danger. As a result, the species used to have several thousands of living specimens, but, in only a few years, there are only about 2000 left.

In the year 1969, animal scientists spotted the last wild horse in the steppes of Mongolia. However, a pioneering breeding project started, which managed to encourage the reproduction of the species. Mongolian horses ended up being reintroduced again in 1992, in the prairies of southwestern Mongolia.

These horses managed to adapt perfectly to the Hustai region, where they once lived. As a result, the breeding of free horses was a success. Today, there are just over 300 of the world’s 1900 wild Przewalski horses living in a protected reserve in Hungary’s Hortobagy National Park, so their numbers are increasing considerably. Thanks to this, we can currently see wild horses again in the Mongolian wild steppes.

Shoeing a Horse: How to Do it Safely
Horseshoes are an important part of the well-being of domesticated horses. Today, we'll tell you how to go about the shoeing of a horse safely. Read more »
Link copied!
Interesting Articles
Mammals
What Are the Differences Between Jaguars and Leopards?