Horses Rescued from Flood Give Birth: The Miracle of Life

Once again, nature surprises us with the resilience of our companions, the animals. How could pregnant mares survive the floods for entire months? Here we tell you the story. 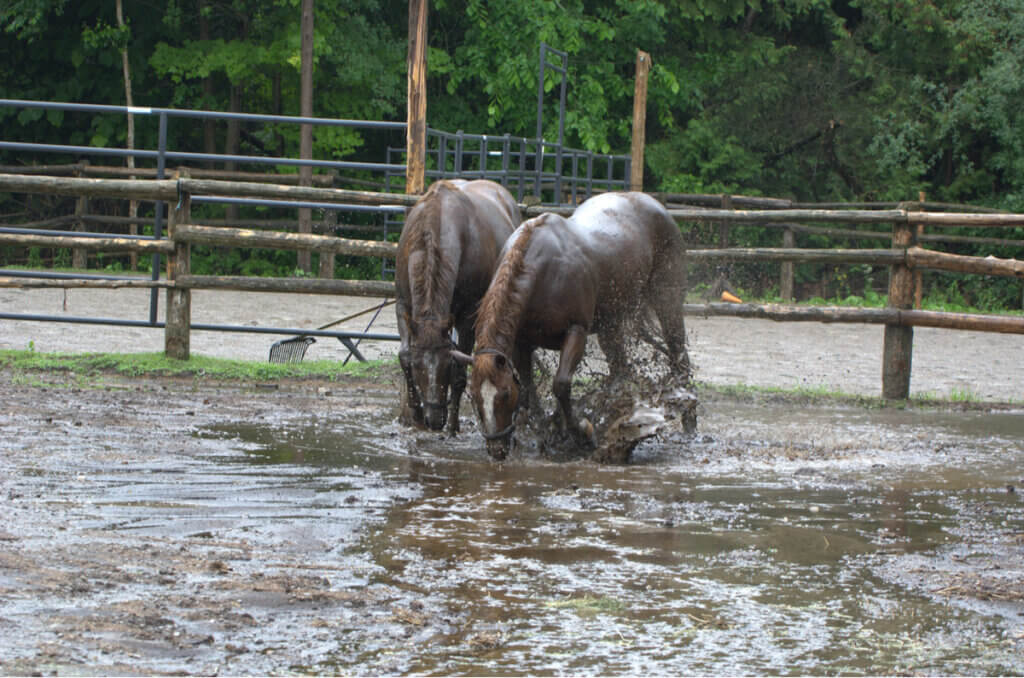 In the town of Wellingborough, Northamptonshire, England, severe flooding often occurs after rainy periods. So much so that the City Council Environment Agency offers citizens all the necessary information to prevent flooding. Sadly, this did not protect the horses rescued from the most recent floods.

Nowadays, floods are more frequent, dangerous and unpredictable. Those who suffer most from these catastrophes are farm animals. Generally, ranchers don’t have the resources to rescue them, and they end up drowning. Fortunately, not all perish like this.

Today we bring you the wonderful story of the horses that gave birth after having been rescued from the Wellingborough floods, a true miracle of life.

Climate change, a consequence of global warming, makes the air more humid. This results in heavy torrential rain that usually takes place toward the end of the winter and during springtime. Nonetheless, summer storms are more and more frequent.

It’s the overflowing rivers that cause floods like the ones in Wellingborough. Normally, riverbeds have flood risk areas, but the surrounding vegetation keeps the overflowing in check. However, rivers passing through human settlements lack the necessary vegetation, and, when they overflow, there’s nothing to stop them.

In the case of the Wellingborough floods, it was the Nene River that swept away everything in its path. In addition to the potential human and material losses, floods can bring about many other threats. Consequently, floodwater can get contaminated with human and animal sewage.

Moreover, it can contain dangerous bacteria and harmful chemicals. Therefore, it can be really dangerous for people as well as animals – as in the case of the rescued horse –  to be caught up in such waters.

Horses rescued from the Wellingborough flood

At the beginning of this year, several animal protection organizations warned of dozens of abandoned horses on the grazing fields of Wellingborough. These animals have suffered the consequences of major storms such as Ciara and Dennis, which have flooded the fields, leaving no food or shelter for the animals.

Both land and horse ownership were unclear (and continue to be so). Therefore, the Conservative MP Pete Bone asked the Royal Society for the Prevention of Cruelty to Animals to investigate the condition of the horses.

The veterinary inspectors who examined the animals and their environment determined that they had enough dry land and hay to feed on. Nonetheless, several horses died or had to be euthanized.

The actions of the City Council did not seem to please the citizens who carried out demonstrations in conjunction with animal protection organizations, such as World Horse Welfare and Blue Cross.

Happy ending for the rescued horses

After months of protest, many signed petitions and other campaigns, the abandoned horses from Wellingborough were rescued.

However, there is one more obstacle to overcome. Many of these horses seem to not have been around people for years, according to various associations that shelter equines. This makes the rehabilitation of the animals extremely difficult.

To the surprise of the rescuers, many mares gave birth to foals shortly after being saved. An extraordinary fact, given the state of malnutrition of the animals.

Gradually, the animals are recovering and are greatly enjoying their new lives. Many of them have already found a family that will care for them as they deserve.

How could the pregnant mares have survived?

Horse gestation lasts about 11 months, and in some cases it can go up to one year. This proves that many of the rescued horses had been abandoned for at least 12 months in very unsuitable conditions.

During mare gestation, the amount and type of food change considerably. Pregnant mares need a varied diet or dietary supplements. Unfortunately, these animals had no possibility to forage beyond the fence limits. These facts highlight the resilience and strength of these animals.

Sadly, those who witnessed this miracle of life highlight the nefarious legislation that should protect animals. Once more, it becomes clear that a segment of the human population mistreats and abandons animals.

Combating Animal Cruelty: How to Get Involved
Today, we want to show you some of the different ways you can get involved, and help combat animal cruelty on a daily basis. Read more »
Link copied!
Interesting Articles
Horses
Learn How to Ride Horses