A small imbalance in one part of a horse's body can trigger a serious problem in an entirely different part. In this article, we’ll tell you all about laminitis in horses and its possible relationship with the gastrointestinal system. 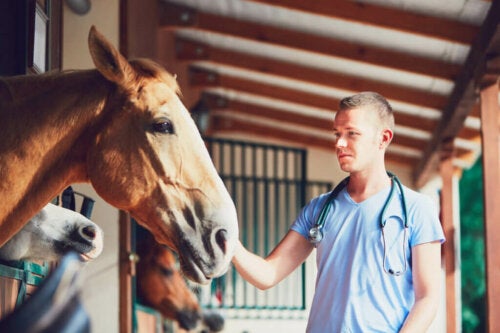 Unfortunately, it’s a common problem in all horses. However, it can also affect sheep, goats, and pigs. But the one these slender quadrupeds suffer from is the most serious and common.

Laminitis in horses: the anatomy of the hoof

The horse’s weight and its own movements will continue to push the toe bone toward the ground as normal. But without the protection of the hoof, the blood vessels rupture and the soft tissues become inflamed. Therefore, acute pain and lameness don’t take long to appear.

Onset and course of laminitis in horses

Laminitis begins when the cause triggers laminar separation, which can last between 30 and 40 hours. During this period, before symptoms appear in the extremities, the horse usually experiences the following problems:

These multisystemic afflictions, anatomically distant from the hoof, are due to the discomfort the disorganization of the laminar anatomy causes. This is what’s known as the development phase and it doesn’t always appear. Some animals directly pass to the acute phase, without having suffered from an apparent health problem.

As we mentioned above, the development phase ends up merging with the acute phase when the first signs of hoof pain appear. It lasts from this moment until there’s clinical evidence of displacement of the phalanx within the hoof.

Laminitis tends to mostly affect the forelimbs, presumably because they bear most of the horse’s weight (approximately 65%).

A horse with acute laminitis tends to shift their weight from one foot to the other. They do this to relieve the pain. Even so, at some point, the animal may be forced to lean on the affected foot, meaning the discomfort will return.

If the horse doesn’t die during the acute phase, it’ll suffer displacement of the phalanx within the hoof. This is the hallmark of chronic laminitis and can be seen on an x-ray. The symptoms in this phase of the disease can last indefinitely. Here are some of them:

This last symptom can lead to infectious osteomyelitis of the third phalanx and even to hoof detachment.

How serious can laminitis get in horses?

Laminitis is arguably the most serious foot disease. In fact, it’s the second cause of mortality in horses, after colic. If the affected animal doesn’t die due to natural causes, the vet usually resorts to euthanasia, due to the animal’s permanent suffering.

Furthermore, despite best efforts, the response to therapy varies greatly between horses, which makes an accurate prognosis even more difficult.

Final note: laminitis in horses and its relationship with the gastrointestinal tract

Most authors state that laminitis is an after effect of another event that’s unrelated to the foot. At first glance, this may seem strange. But this disease has been shown to directly involve the gastrointestinal tract. Here are some of the causes experts have described:

However, a particular cause arouses veterinarians’ curiosity: the alterations in insulin metabolism. Horses with a history of insulin resistance are said to tend to suffer from laminitis.

To test this hypothesis, experts have conducted experimental studies to monitor horses with prolonged hyperinsulinemia. All of them ended up developing laminitis in less than 72 hours.

Therefore, veterinarians recommend regularly subjecting horses to blood tests. This way, they detect hyperinsulinemia, a veterinarian can apply techniques to reduce its concentration in the blood and, above all, restore insulin sensitivity. For example, through low-glycemic weight-loss diets and moderate exercise.

Frequent Diseases in Competition Horses
The frequent diseases in competition horses are due to various factors that make them prone to locomotor pathologies and other diseases. Read more »
Link copied!
Interesting Articles
Horses
Learn How to Ride Horses