The Strangest and Most Beautiful Animal Friendships

In this article, we'll look at some unlikely friendships between animals. However, even though they're a bit strange, they're also some of the most beautiful animal friendships we've seen. 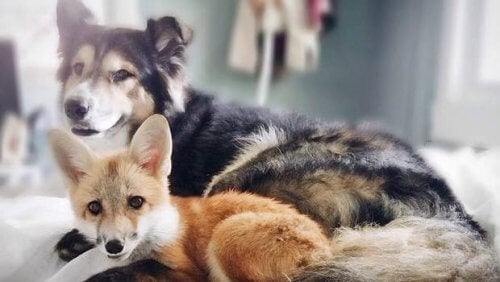 When it comes to animals, we love the fact that there isn’t any prejudice in their lives and relationships. For them, breed, color, and shape don’t matter. They only want to connect with other living things with their hearts, regardless of whether or not they’re the same species. As a result, beautiful animal friendships can emerge.

Strangest, but most beautiful animal friendships

Many of these animals were bred to live to together in groups or herds. However, some of them are the exact opposite, and were meant to live alone. However, regardless of the way they were bred, many seek one another’s friendship. This may be out of necessity or because they have grown used to spending time with them.

Check out these friendships:

If you stop to think about what these two species have in common, the only conclusion you’ll come to is that they both have long necks. That’s it. Giraffes are suspicious and ostriches are curious. Therefore, they’re not afraid of anything.

However, in Busch Gardens in the United States, there’s a giraffe and ostrich that want nothing more than to be together. And, they have 65 hectares of land to live on. People often see them kissing, sitting together, or walking. There are some really beautiful photos of them!

Can you think of two species that are more different from one another? Size is one of the main differences in this friendship. However, even though it’s unusual, it’s not impossible.

Bubbles is an elephant that was rescued from Africa. Some hunters were going to steal the ivory from its horns and take it to the United States. There, Bubbles met Bella and they became friends. Bella used him as a springboard to play on or to jump into the water. At first, they thought this might upset the elephant, but it was quite the opposite. In fact, they became inseparable friends.

Read more: 5 Tips to Take Into Account if You Want to Swim with Your Dog

Tinni lives in Norway and one day, when walking with her owner, she came across a fox named Sniffer. Even though her owner was afraid, Tinni was curious, and she approached the animal. From there, a surprisingly inseparable friendship emerged.

Tinni’s owner has taken some very cute and surprising pictures of the two walking together in the forest. Also, he uses the pictures to start a project to help bring awareness to the harm of buying fox fur.

Torque is a dog who found a baby owl one day when she was walking through her garden. Even though she was just a puppy, she decided to adopt the owl and take care of it.

As time went on, they built a friendship based on love, affection and respect. They’re inseparable!

Keep reading: Which Dog Breeds Are the Most Affectionate?

Although it may seem unbelievable, it was the little dachshund who adopted the lion when he was two years old. They soon became inseparable. They have been together for more than five years and the lion treats the dachshund as if she were his mother.

Their friendship is so close that the dog even helps the lion clean its teeth after eating.

A lion, a bear, and a tiger

We think there’s no better ending to this article than to talk about the friendship of three different animals. The three of them lived together under the clutches of a drug dealer who constantly mistreated them.

For example, the bear had its collar embedded in its neck and they had to remove it through surgery. Their suffering united the three animals. Fortunately, they’ve been able to forget that suffering and they’ve been united through one of the most beautiful animal friendships we’ve ever seen.

Do You Think Dogs and Cats Can Be Friends?
In spite of this myth surrounding canine-feline relationships, dogs and cats can be friends, with a few exceptions, of course. Let's find out more about it. Read more »
Link copied!
Interesting Articles
Other Animals
The Arabian Camel: Characteristics, Behavior and Habitat

Other Animals
Some Amazing Species of Crustaceans

There are no fewer than 67,000 different species of crustaceans in total. Most of them are aquatic and live in…