Humans and Foxes: Are Foxes a Threat to Humans?

Humans and foxes have lived together a long time. However, do foxes present a threat to humans? 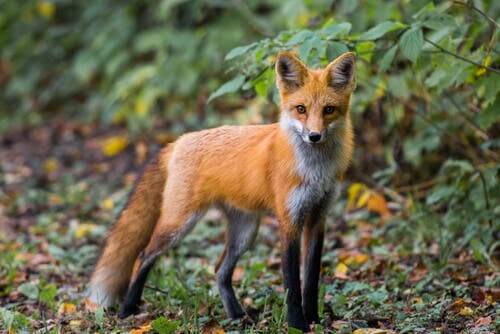 Many people consider foxes to be an unfriendly presence on farms. In addition to consuming organic waste that we produce, these animals can also attack pets and livestock. Humans and foxes have coexisted for centuries. But do foxes present a threat to humans? Or maybe their natural habits are just detrimental to livestock?

Humans and foxes: A complex coexistence

The coexistence between humans and foxes is well-known. As a result, for centuries, many artists from around the world have portrayed humans and foxes in various artistic and cultural representations. In some countries, the fox is a creature related to cunning and mischief. Consider the famous character Don Diego de la Vega or “Zorro.” In fact, zorro means fox in Spanish.

Another example is from the 1981 Disney animated film, The Fox and The Hound. In the film, a woman saves an orphaned fox cub. She raises the fox until it can live in the wild on its own.

There aren’t many credible stories of humans and foxes coexisting in homes. However, our relationship with these wild animals has always been close. In fact, this coexistence is inevitable. Foxes are abundant on all continents, excluding Antarctica.

The first settlers established on lands that were occupied by various animals, including foxes. In fact, when our ancestors developed crops, the fields invaded the natural habitat of these animals.

However, foxes often stayed close to settlements because of the possibility of easy food. As a result, foxes often found other animals, such as dogs. Of course, on farms, they also found sheep and cattle. Maybe this where foxes earned their reputation as dangerous.

With industrial revolutions and technological advances, cities gradually grew. The expansion was so rapid and intense that it often broke boundaries between rural and urban land. Again, humans began to occupy the habitats of many native species.

You may have heard of times that people found a fox in the middle of a city. However, in reality, cities were founded on what used to be the natural habitat of these animals. Perhaps humans are the invaders, not these animals.

However, the coexistence of humans and foxes actually led foxes to adopt new habits. They began to come on to private properties to search trash cans or get into kitchens. As a result, many humans tried to get rid of foxes from the cities.

Humans and foxes: Is the fox really dangerous?

Whether or not the fox is dangerous to humans depends on the context, just like any animal. When a living being feels threatened, they will naturally try to defend themselves.

However, we must learn to differentiate domestic animals from wild animals. We also should respect their instincts. Not all species can live close to humans and adapt to our habits. In fact, for many animals, living with humans can be deadly.

The Fennec Fox: Native to the Sahara Desert
The fennec fox is among the smallest canids on the planet. It's an example of adaptation, as it's able to face the hostile conditions of the Sahara Desert. Read more »
Link copied!
Interesting Articles
Wild Animals
The 5 Most Dangerous Animals in the World