It’s worth noting that this species is capable of “keeping” a fertilized egg after copulation until autumn, and that birth occurs in its burrow while it hibernates. 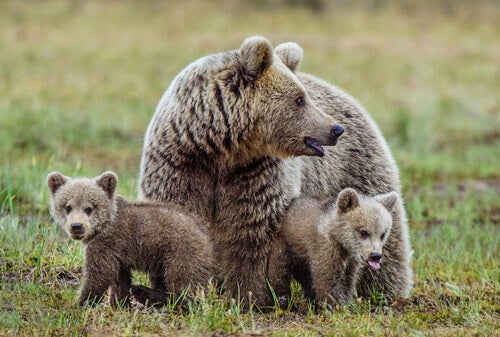 This is one of the subspecies of brown bears that exist today and, as its name indicates, it’s native to Europe —between the Iberian Peninsula and Scandinavia. In this article we’ll tell you everything about the European brown bear, a forest dweller.

Traits and habitat of the European brown bear

Among the subspecies of brown bear, the European one is the most “famous”, as it lives in the forests and tundra of the entire continent. It lives from the Iberian Peninsula in the south, up to Scandinavia in the north. However, there are also populations in Russia, Italy, Austria, and Eastern Europe. It prefers oak, birch and beech forests, as well as rocky areas and scrubland.

A good way to detect the European brown bear in the forest is by following its tracks: wide, large, with well-marked claws and toes. Ursids are plantigrade, so when walking, they use their entire paws. In addition, you can see claw marks on tree trunks or attacked beehives.

With a longevity of about 30 years, the European brown bear can measure up to 2.5 m (8 ft) when standing on its hind legs, and it weighs about 300 kg (661 lb) as an adult. Sexual dimorphism is quite marked, as males are twice as heavy and large as females.

Even if it’s called “brown”, the truth is that its fur doesn’t always have that tone. It can vary according to the individual. For example, when they’re small, they have a kind of whitish collar. However, this coloration on the neck disappears with the first shedding after the first year of life. It’s worth noting that the bear renews its coat each summer season.

Its vision is not very well-developed and its eyes are very small. Therefore, it doesn’t detect static objects or animals. In contrast, both its smell and hearing are very good and help it in its daily life.

This species reaches sexual maturity around four years of age, and females go into heat between May and July. Nevertheless, they can also copulate before ovulating in order to increase the chance of getting pregnant.

Once the egg is fertilized, it’s “kept” until autumn to be implanted. At that moment, the gestation begins, which lasts for two months. The birth takes place inside the burrow during full hibernation. Each litter can have up to three offspring weighing about 350 grams (0.8 lb) each.

The cubs live with their mothers for one year and a half. During that period, they must learn everything related to hunting and defense. At the end of this period they already weigh about 30 kg (66 lb). The interval between births is approximately two years.

The European brown bear spends the entire winter in burrows where it hibernates in a state of disrupted sleep, and without changes in its body temperature. It has a territory of several square kilometers —larger in the case of males— depending on the location on the continent. On average, a female needs an area of about 350 km² (135 sq mi) and a male around 5 400 km² (2085 sq mi).

In terms of food, it’s omnivorous, like most bears —except the polar bear, which is 100% carnivorous, and the panda, which is herbivorous. During spring and autumn, it eats vegetables, insects, small vertebrates, and carrion, although its favorite is honeycomb.

In the summer, they move to the riverbanks where they skillfully hunt the salmon that jump out of water. This is when males, females, and young come together. However, mothers must keep the little ones away from the territorial males in order to avoid confrontations.

The Panda: Characteristics, Behavior and Habitat
The panda, also known as the "giant panda" is a unique mammal known for being at the top of the list of endangered animals for more than twenty years. Read more »
Link copied!
Interesting Articles
Mammals
Characteristics and Behavior of the Capuchin Monkey