How Do Bears Care for Their Cubs?

Brown bear females are loyal and attentive mothers who care for their cubs for more than a year before their young are emancipated. 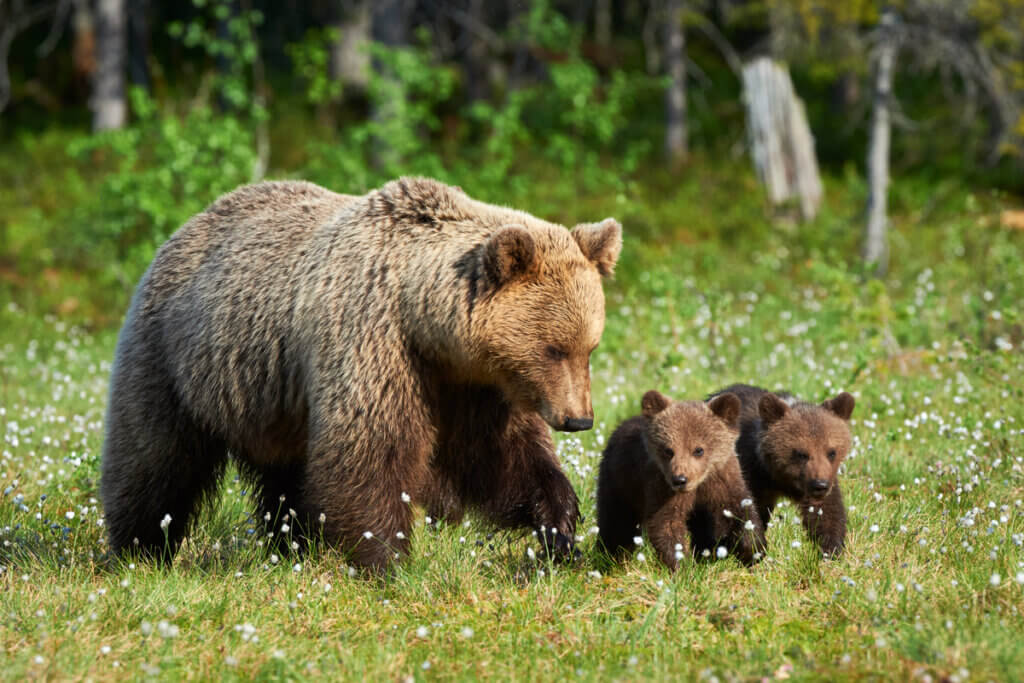 The brown bear (Ursus arctos) can appear to be quite a ferocious mammal. When it stands on its hind legs, even the most intrepid human would feel terrified. Despite its imposing appearance, however, watching how bears care for their cubs is both a poignant and fascinating spectacle.

In addition to their natural instinct, environmental pressures have caused bears to adopt new tactics to avoid the dangers posed by humans. So, if you want to know how they care for their young in a globalized world, we encourage you to read on.

About the brown bear

Before immersing ourselves in the maternal tactics of this species, it’s important to know some of the most relevant facts about the brown bear. We’re looking at a mammal of the family Ursidae that’s typical of Eurasia and North America. It presents a very marked morphological range, as its length varies from 5 feet to almost 10 feet. At the same time, it can weigh from 220 to 1,490 pounds.

These animals are omnivorous, as they have four sharp canines in their jaw, typical of carnivores. Likewise, they also possess incisors and molars suitable for cutting herbs and stems.

As far as reproduction goes, bears breed between May and July, and the gestation period is about two months. During the period of parental care, it’s common to see females traveling as a family unit with their cubs.

Mothers can give birth to between one and three cubs, although more than half of groups consist of two cubs and the mother. During this period, which lasts approximately one and a half years, they spend their time in the following way:

Despite the genetic imprint of the various animal species, they adapt to the environment and its changes. Below, we’ll show you how they take care of their cubs in an environment highly modified by human beings.

Bears use humans as a “barrier”

A study published in the Royal Society led to the discovery of unusual behavior in the way that bears care for their cubs. Although it seems unbelievable, females with cubs (located in Sweden) approach human population groups to avoid the aggressive behavior of males in their species.

It’s common for male grizzlies to choose to kill the cubs of a female with whom they haven’t procreated. That’s because doing so may make her more sexually receptive sooner. Therefore, the mother bear’s selection of a suitable habitat will directly influence the survival of her offspring.

In this study, researchers observed that the most successful mothers were those who chose habitats close to humans. They choose areas close to populated areas with sufficient vegetation in order to protect themselves and their families. This is because males in heat don’t venture as far from the forest canopy. Thus, these brave mothers use us as a shield to prevent their young from peril.

Of course, not all brown bear interactions with humans are positive. According to a study from the journal Nature Commons, the time bears spend with their cubs increases with the presence of hunters.

In general, females care for their cubs for a year and a half. However, data shows that this period can extend to 2.5 years, especially in areas where hunting is a threat to their survival. Since it’s illegal to kill mothers that are with their cubs, the longer they stay with their offspring, the greater their chances of survival.

This is a clear case of evolutionary trade-off. In other words, the longer the females stay with their offspring, the less they will be able to reproduce, but the longer they’ll live.

A female’s risk of being hunted is four times greater when she goes alone than when she’s accompanied by her offspring.

There are two sides to the story

As we’ve seen, humans can be both beneficial and detrimental to a female grizzly bear with young. Although these adaptive mechanisms are fascinating, we can’t help but think that, as a species, it’s a real shame that our activity is so harmful that it should cause changes in the ancestral behavior of other species.