Other omnivores exist, as well as humans. Some of the most obvious are dogs, ostriches, grizzly bears and pigs, but the list doesn’t stop there. Caract 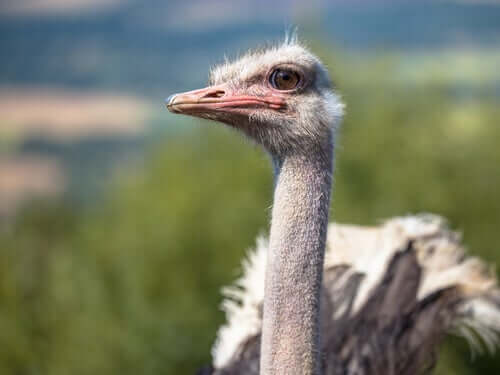 Omnivores have bodies that can adapt to a mixed diet. That is, they can be both “vegetarian” and “carnivorous” at the same time. This versatility gives them a great advantage when it comes to survival. Below, we’ll discuss 9 omnivores in more detail and other interesting aspects.

The word omnivore comes from the Latin omnis which means ‘everything’, and vorare which means ‘to eat’. Therefore, omnivores are animals that eat “everything”. They are opportunistic eaters, since their bodies are ready for whatever they can get their “hands” on. It doesn’t matter where they are or what climate they’re in.

Anatomically, their digestive organs are perfectly adapted to consume various types of food, whether it be meat or plants. The oral structure is also well-suited to tear and chew food. This is why the molars of these animals are usually particularly strong.

There are several types of omnivorous animals. Birds such as doves, gulls, ravens, geese, pheasants, toucans, magpies, and herons. Fish such as pufferfish, guppies, clownfish and the blue tang. Reptiles such as some species of turtles and lizards. Mammals such as rats, wild boar, gerbils, and armadillos. And finally, invertebrates such as wasps, ants and coral. Among some of the most surprising are:

Mice are mammals that became omnivorous from eating urban waste. They can’t always find plant waste, so mice adapted their diet to eat any waste they can find.

While foxes are more likely to eat the carcass of a dead animal, they aren’t picky. They will also eat berries and other fruit, meaning they’re omnivores. If necessary, they’ll feed on small prey such as rabbits, squirrels, mice, and worms, and insects such as beetles and grasshoppers.

The coati is a small mammal that can feed on insects or bird chicks, as well as eggs, frogs, snakes and fruit. However, they tend to eat insects, as they’re easier to come by.

Chickens are birds that will eat anything from insects to meat. We usually associate them with having a plant-based diet of legumes, fruit and vegetables, but they can also eat meat in small quantities. When they’re in captivity, they’re usually fed a diet rich in corn.

Squirrels are mammals that feed on nuts, such as hazelnuts and walnuts. They also feed on various seeds (sunflower, sesame, etc.), flowers, mushrooms, thistles, insects (crickets, worms) and even bird eggs. They’re very opportunistic and will try to get whatever food they can to take to their burrow.

Turtles can eat anything from fruit and veg to insects and even small reptiles. For example, the red-footed tortoise, the red-eared slider or the painted wood turtle, are terrestrial species that base their diets on whatever kinds of food they find. When it comes to omnivorous sea turtles, there are the Amazon River turtle, the painted turtle, the common snapping turtle, the Spanish pond turtle, the Chinese turtle and the Indian turtle.

Piranhas have very sharp teeth that can tear the flesh off its prey. And, although piranha attacks on humans have been recorded in the Amazon River, their diet consists mainly of fish and aquatic plants (especially algae).

This omnivorous bird can’t fly, but its digestive system is prepared to eat different types of food, such as leaves, fruit, seeds, small insects like grasshoppers, and reptiles like lizards, snakes and small birds.