The Effect Climate Change Has on Polar Bears

We still don’t know the full effect climate change has on polar bears. But, we are seeing more and more images of starving bears. Therefore, scientists predict that this could see the end of polar bears. 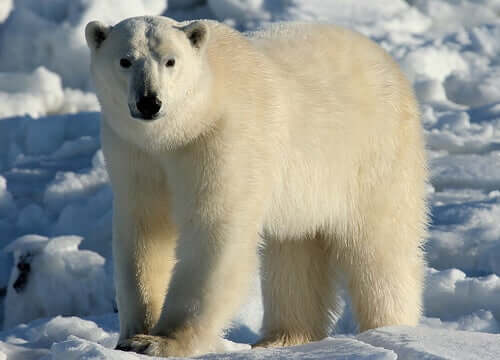 The latest photos taken by Cristina Mittermeier and Paul Nicklen, published by National Geographic, are just more snapshots of starving polar bears in areas where there’s barely any snow. Polar bears need a lot of protein and animal fats to maintain their bulky figure and survive in cold temperatures.

Many photographers have been judged and criticized for not intervening. However, they emphasize how dangerous it is to approach such an animal and the impossibility of asking for help. The best thing they could do was to publish these images that will stay imprinted in our memories.

This forces them to travel hundreds of kilometers in search of food, bringing them ever closer to human populations. These animals are capable of consuming entire whale carcasses, and images of them rummaging through trash cans have been captured. You can see this in images that have gone viral and have now become a symbol for the fight against climate change.

Climate change isn’t just a problem for polar bears when it comes to feeding. Although heat is thought to be another threat, it currently doesn’t appear to be a problem for these bears. However, the loss of ice surfaces reduces their habitat, making their ecosystem disappear at a phenomenal rate.

Climate change is not the only human consequence threatening this species, as scientists warn that pollution and the presence of plastics are beginning to affect polar bears. The consumption of mercury-contaminated fish is also dangerous for polar bears.

According to conservation associations, there are as few as 25,000 wild polar bears left, and in recent years we have lost many of them to climate change. The polar bear has been considered an endangered species since 2008 and has joined a growing list of endangered animals.

There are fears that climate change will cause wild polar bears to disappear by 2050. This  paints a more uncertain future than that of other traditionally more threatened species, such as the panda bear. Paul, one of the photographers who photographed the polar bear in question, is clear about the causes of its decline.

He wants us to start taking the fight against climate change seriously, and he doesn’t just mean through the law. He believes that reducing our consumption of meat and other consumer goods is crucial now more than ever for fighting climate change. Something that could see this predator, the largest in the world, take its last steps on Earth.

The images, popularized by social networks, continue affecting people’s consciences. Only time will tell if they manage to completely shake human consciousness and promote a true change in defending these animals.

He wants us to start taking the fight against climate change seriously, and not just governments. Changing our intake of meat and consumer goods seems more necessary than ever to avoid a catastrophe for this predator, the largest that currently treads the earth’s surface.

The Giant Panda: A Symbol of Culture and Tradition
The giant panda is one of the most famous animals in the world. Today, we'll be taking a closer look at their significance in their native country of China. Read more »
Link copied!
Interesting Articles
Mammals
Types and Characteristics of Asian Elephants