The Panda: Characteristics, Behavior and Habitat

Even in Ancient China, this animal was considered unique, not just for its appearance but also for its behavior. 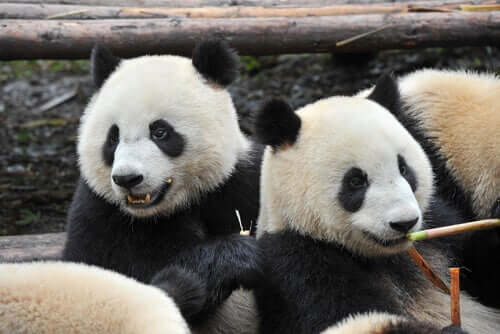 The panda, also known as the “giant panda” is a unique mammal. They’re known for a love of bamboo and for being at the top of the list for endangered animals for more than two decades. Presently, they’re less endangered, but they’re still highly vulnerable.

Currently, there are more than 2,000 living in the wild, however, many continue to live in captivity in sanctuaries. As a result, they’ve become a symbol for environmental protection and the chosen image for important organizations such as the WWF (World Wildlife Fund).

The panda and its characteristics

In terms of their size, shape, and behavior, pandas are quite similar to other bears. The most distinctive thing about them is the pattern of their coat, with the recognizable black and white patches around their eyes, ears, and legs.

Obviously, they’re robust animals with a well-developed muscle structure, especially in their front legs. This allows them to climb and swim with ease. They can weigh up to 330 lb and, when standing, can measure over six feet tall.

There is one very curious physical feature: they have a sixth finger on their front legs, which they use as a thumb when climbing or reaching for food. It’s actually not a thumb at all but part of the bone in their wrist.

Their natural habitat is the bamboo forests and mountain ranges of central China and Tibet. However, most of these habitats have been destroyed, and as a result, sanctuaries and reserves have become vital for keeping the species alive.

Unlike other bears, pandas don’t hibernate. Instead, they move to warmer areas in the winter and spring. Basically, their natural habitat doesn’t force them to hibernate, so they don’t.

Whilst their digestive system is best for digesting meat, their favorite food is bamboo. This means that they’re omnivores, being able to eat either vegetation or other animals, such as small rodents, birds, eggs, and insects. However, they only eat other animals very occasionally.

Pandas can spend up to 14 hours a day eating since they need to eat between 26 and 83 lb of food every day in order to meet their nutritional needs.

Pandas are solitary animals and very territorial. They clearly define their territory by urinating and normally don’t look to spend time with other pandas or let other pandas into their space. There are, of course, special exceptions to this.

They’re not very active animals, and they limit themselves mainly to eating and sleeping. This means that they’re pretty quiet. Although they have a very striking way of mating.

Pandas reach maturity between 5 and 8 years old and intercourse is normally quite short. A panda can give birth every two years, and it normally takes 3 years for the young to become independent.

As one final fact, there is also a subspecies of panda known as a Qinling. They have a coat with the same patterns as a normal panda but with brown patches instead of black. This subspecies is smaller than the giant panda, and research suggests that this color variation is the result of environmental influences.

Panda Chow Chow: Is it a Dog or a Panda?
This is an incredible animal and, at first glance, you'd swear he was a panda. Today, we'll go into detail about the panda chow chow dog breed.  Read more »
Link copied!
Interesting Articles
Wild Animals
5 Animals that Live in Grasslands