The Best Swimmers in the Animal Kingdom

There are some animals that spend most of their lives in the water, and some are born in it. Here are some of the best swimmers out there. 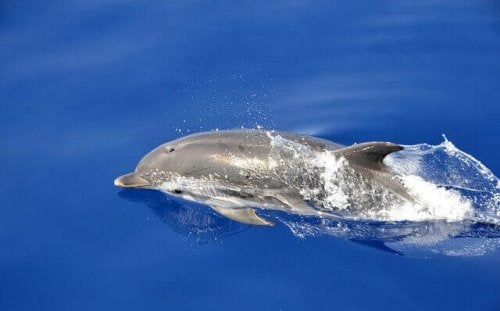 Fish aren’t the only good swimmers in the animal kingdom. There are lots of land animals that do perfectly well for themselves in the water, though some like it better than others.

All animals have a common, aquatic ancestor. The difference is that some of us are equipped to live on land, and others in the water. Today, we’re going to focus on the best swimmers in the animal kingdom.

The best swimmers in the animal kingdom

1. Dolphins, the best of the best

The body shape of cetaceans like the dolphin (the photo at the top of this article), makes them great at swimming. They have a hydrodynamic body, like fish. The shape of their body, the lack of hair, their short neck, and the fact that they have fins instead of feet all help them move quickly in the water.

Their lungs can also hold a lot of oxygen, which means they don’t have to go to the surface to breathe very often. On top of that, they have heat-regulating mechanisms, like a thick layer of body fat (blubber), that help them handle the colder temperatures in the water.

Dolphins are the fastest swimmers out there. A lot of professional athletes actually try to imitate their movements to swim faster. The basic pattern is an up and down movement of their tail, kind of similar to a kick. But the force in a dolphin’s tail is about five times that of any Olympic swimmer.

Unlike dolphins, these animals can live on land, though they’re still a bit clumsy. They have front and back fins, and a thick layer of blubber to insulate them from the cold.

Sea lions can swim as fast as 25 mph, which makes them one of the best swimmers in the animal kingdom.

You might not expect it, but polar bears are also some of the best swimmers in the animal kingdom. They can swim hundreds of miles without taking a break. Unfortunately, they’re having to do that more and more as the ice caps melt around them. They have to travel long distances to find food, or a piece of ice to stand on.

Penguins are probably the most famous of the flightless birds, but their swimming abilities make up for them not being able to fly. Their “wings’ are the key to their speed in the water. Their wings have no feathers (they’re more like fins). But what they do have are microfilaments that trap the air and release tiny bubbles that help them glide through the water.

Hippos spend a lot of their lives in the water. They spend about 16 hours a day submerged, and can hold their breath for about five minutes straight. Their eyes and nostrils stay above the water while they’re submerged, and that is why they can spend so much time swimming.

You might not expect it due to their size, but elephants actually love the water and are great swimmers. Their main strong point is their endurance. An elephant can swim up to 30 miles, using its trumpet as a snorkel.

Cats have a reputation for hating the water, but that’s definitely not the case with jaguars. They’re the biggest feline in the Americas, and tend to live near large bodies of water.

Oh, and not only are they good swimmers, but they’re also great at fishing. This one of the main reasons they get into the water.

8. Beavers, the architects of the river ecosystem

Beavers have an important relationship with water. They build their dams along the sides of lakes and rivers, and actually change the habitat they live in with these constructions.

This rodent is relatively clumsy outside the water, but very agile in it. They’re definitely some of the best swimmers in the animal kingdom. Their back legs end in these big, flat feet, with a tail that acts like a rudder.

They can swim at about 5 mph and spend about 15 minutes at a time underwater. They have transparent eyelids, which means they can see perfectly while they’re under.

This is just a small list, but, as you can see, there are lots of animals that feed or reproduce in, or interact in some way with water. This age-old influence might be why we have such a strong relationship to the water, too.

But before we go, we should mention that a lot of these swimming animals are at risk of extinction because their habitats are being destroyed. We have to protect them if we want to them to remain a part of our world!

Pets and Swimming Pools at Home
Combining pets and home swimming pools can be great fun, but it's also risky. In the heat of summer, pets like to dive into the water as well as people. Read more »
Link copied!
Interesting Articles
Wild Animals
5 Animals that Live in Grasslands