There are several different species of bear around the world. In today's article, we want to take a closer look at the brown bear. 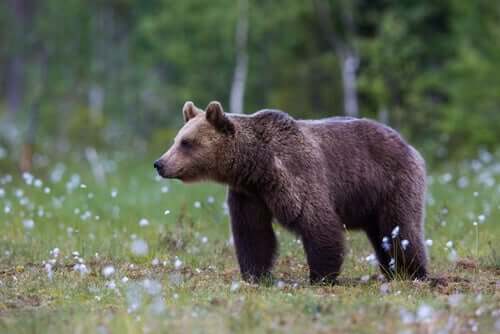 We often think of bears as cute, cuddly creatures – hence the expression “bear hug”. However, it’s important to remember that these are wild animals, rather than friendly domestic pets. In fact, mankind has caused significant damage to their habitat, threatening their very existence, so it’s not really surprising that they’re not all that keen to be our friends. Today, we want to tell you all about the brown bear, one of the most common bear species in the world.

Though you might think that all bears look the same, there are several different species, with each varying in size and color. Let’s take a look at some of the most notable features of the brown bear.

Let’s get to know the brown bear

The brown bear is a huge animal. They have large heads, with round, upright ears. Their fur is fairly short and relatively sparse (especially in summer), while dense enough to protect them against adverse weather conditions. Depending on the region, the color of their fur can vary from light brown to black.

In Europe, males can weigh up to 400 lbs. North American brown bears are far larger in both weight and size, often exceeding more than 650 lbs.

Bears are plantigrades. This means that, when walking, they put all their weight on the soles of their feet, just like humans. They can walk on their hind legs, although normally choose not to, preferring to reserve that stance for situations such as fighting, or defending their territory.

The brown bear – habitat and diet

Brown bears are native to several countries around the world, including the US, Canada, France, Spain and Russia. In many regions, however, they have sadly gone extinct.

They don’t do well in warm climates, and prefer to live in peaceful, remote areas with few human inhabitants. They love forests of birch, Scots or black pine, and fir trees. Like all bears, they don’t like being confined to small spaces, and have been known to maintain territories of several square miles in area: 50 – 600 sq miles for males, and 20 – 90 sq miles for females.

Brown bears predominantly eat a vegetarian diet, and their teeth are designed for eating fruit and vegetables. The image of bears eating honey (like those we’ve seen so often in cartoons) is actually completely true. Whenever they have the chance, they enjoy supplementing their diet with this rare delicacy.

However, when food is scarce, they will eat carrion, as their ancestors had teeth strong enough to bite through bone.

Bears are generally solitary animals, except when females are in heat. When the mating season arrives, the males’ priorities change, and they will look for a suitable female. When a litter is born, it’ll be three years before the mother will be able to raise another. A female can give birth to up to three cubs per litter, which makes it difficult for bear numbers to increase.

Male bears are polygamous, which means they aren’t tied to just one female. As such, a male may mate with several females during the mating season. After mating, they remain close to the females throughout the pregnancy, before returning to their solitary, independent lifestyle.

When the cubs are born, they usually weigh around 1 lb. They’re born completely blind, and without teeth. They won’t leave their cave until they’ve grown a full coat of fur, as it’s essential for protecting them against any number of external threats.

If you see a brown bear, it’s best not to get too close. While they might look sweet, they can be aggressive, and their fear of humans can make them defensive. However, we hope you’ve enjoyed getting to know a bit more about them.

The Panda: Characteristics, Behavior and Habitat
The panda, also known as the "giant panda" is a unique mammal known for being at the top of the list of endangered animals for more than twenty years. Read more »
Link copied!
Interesting Articles
Mammals
Meet the Squirrel Monkey