A ravenous carnivore, the polar bear possesses a body which allows it to adapt to extreme cold. We'll tell you all the details you want to know about this age-old and formidable animal. 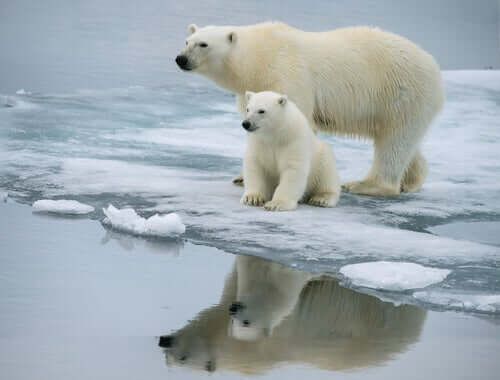 The Arctic’s apex predator is one of the largest land mammals in all the world. It’s characterized by having a coat of fur that’s completely white, which allows it to adapt to its frozen habitat. In the paragraphs that follow, we’ll take a deeper look at the characteristics, behavior, and habitat of the polar bear.

The characteristics and habitat of the polar bear

Along with the Kodiak brown bear, the polar bear is one of the largest bears on the planet. What’s more, it’s considered a powerful carnivorous predator that’s at the top of the feeding chain–with the exception of man.

Its scientific name is Ursus Maritimus (maritime bear), given that it’s an excellent swimmer and spends a major part of its life submerged under the freezing cold waters of the Arctic. The polar bear has lived in this habitat for approximately 120,000 years, according to uncovered fossils.

The largest populations of polar bears are located in Canada (60 percent of all specimens), Alaska, Greenland, Siberia, and Wrangel Island. Experts believe that these bears descend from the brown bear but that the color of their fur has mutated given their environment. At the same time, the size of their ears and tail has decreased in order to help these animals stay warm in such a cold place.

As for appearance, the polar bear displays some differences in comparison to other bear species. Its feet are more developed in order to be able to walk on ice and snow and to swim long distances. Its snout is more elongated, it has more fur, and it also possesses an additional layer of fat.

Though it may not look like it, the skin of polar bears is black, which allows them to trap sun rays and avoid losing heat in the winter.

On average, adult males can measure up to 8.5 feet in total length and weigh up to 1100 pounds. At the same time, females are approximately 6.5 feet tall and weigh some 550 pounds. However, before giving birth, females accumulate more fat and come to weigh the same as males.

The polar bear: Behavior and nutrition

The polar bear is the most carnivorous bear of all, given that it lives in a place that lacks vegetation–except for a few weeks in the summer. Its favorite meals are baby seals and beluga whales, although it can also eat walruses and marine birds, such as the guillemot.

An adult polar bear can eat up to 66 pounds of food in one day. It’s interesting to point out that they don’t drink water, as the Arctic’s waters are too acidic and salty. Therefore, they get their hydration from the blood of the animals they eat.

Their hunting technique is as follows: They create holes in blocks of ice, and when a marine animal pops up to take a breath, they capture it. In the case of land animals, polar bears quietly approach colonies and nests.

Although polar bears are quite solitary animals, they tend to have some “friends” among other predators of the arctic, including foxes and wolves. These smaller animals take advantage of the polar bear’s ferocity and efficient hunting in order to eat the carrion they leave behind.

Polar bears don’t hibernate, with the exception of pregnant females. What’s more, they maintain their habits despite the extreme cold and darkness of the region. With respect to their reproduction, this is the only time when individuals come together and treat one another amicably.

Between April and May, mating takes place. However, females “save” the fertilized eggs so that they will begin developing in September. In the meantime, she stores up all the fat she can. This ability is known as “deferred implantation“.

Mothers seek refuge in the winter and give birth to one or two cubs in a shelter that they themselves dig in the ice. During pregnancy and birth, females don’t feed externally. Rather, they get their nourishment from the fat they’ve accumulated. They’ll regain the pounds they shed in summer.

Polar bear cubs are blind at birth, don’t have teeth, and weigh approximately 1.5 pounds. Given these factors, it should come as no surprise that they are unable to fend for themselves until they are 5 months old. From that point on, mothers teach them to find food and to shelter themselves from adult males who, in times of famine, may eat young polar bears.

After two years of staying with their mothers, cubs abandon their “homes”. Finally, when they are 4 years old, they mature sexually.

Meet the Cutest Polar Bear on Social Media!
You have certainly seen the cutest puppies on the social media by now, but have you met the cutest polar bear yet? Read on and get to know him! Read more »

Link copied!
Interesting Articles
Mammals
What Is an Animal Generation?

Interesting Articles
Mammals
What Is an Animal Generation?