Females and males usually reach sexual maturity between six to eight months. At this age, they are already fertile. However, it's recommended to wait until their first year of life to begin breeding. 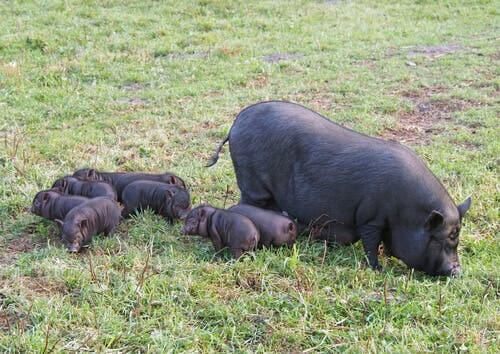 If you’re considering adopting a pig as a pet, you have to respect their nutritional needs and avoid any commercial food. Otherwise, they can develop obesity and other associated diseases.

The cycle of reproduction in pigs

The first step to guiding breeding in pigs is to select the most suitable male and females. To do this, you must observe the pig’s behavior, weight, age, and health in order to choose the best pairs.

Health females are usually able to have more than one piglet at a time. Their cycles last about 20 days. They can also go into heat during any season of the year, except when they’re pregnant or lactating.

As a result, pigs often mate frequently when living in the wild because they can reproduce during different seasons of the year. It’s different if they’re adopted or living on a farm.

Reproduction in pigs can be simple and safe if you take proper preventive measures. If your pigs are already of reproductive age, these tips will help you prepare properly.

When is the ideal age for reproduction in pigs?

The optimal moment for reproduction depends on the environment and condition of each animal. Females and males usually reach sexual maturity between six and eight months of age. At this age, they’re already fertile. However, we recommend you wait until they’re at least a year old. This ensures better breeding.

However, an average female usually remains fertile until she’s 10 to 12 years old. Then, their ovarian function is radically affected as the pig enters the senile phase. Normally, a female stops showing interest in sexual activity before reaching infertility.

On the one hand, pigs must be well fed and healthy to breed safely and give birth to healthy piglets. One way to determine health is by observing if the pig is active, especially during the warmer seasons.

On the other hand, ignoring preventative measures and basic care during reproduction puts the animal’s health at risk. Additionally, this can result in piglets being born very weak or even dying.

In fertile and healthy females, the length of her time in heat usually lasts between 40 and 72 hours. Generally, the female will search for a male during this time. She will stay still with her ears raised in response to the male’s calls or attempts to mount her.

However, we should note that in some cases the female may try to rub up against or mount other sows or the male.

The male will examine all females and try to identify the ones in heat. Upon finding a fertile female, he will proceed to mount her. Then, ejaculation can last from five to eight minutes.

To guide breeding in pigs or use artificial insemination, farmers commonly use a “marker male.” This allows farmers to use this male’s instinct to more easily find out which fertile female pigs are in heat.

When opting for controlled breeding, we recommend that mating occurs once a day while the female is in heat. After this time is up, the female will no longer be receptive to the male.

Reproduction in pigs is essential to maintain their species, as well as the survival of many farmers and their families. However, the use of irresponsible reproductive practices usually has the opposite effect. In fact, it generally threatens the pigs’ lives.

Porcine Respiratory Disease Complex in Pigs
And one of the illnesses that pigs may suffer from is porcine respiratory disease complex. Find out all about it in this article. Read more »