All About the Wild Boar

Wild boars are related to pigs and are known for their docile and peaceful character, unless they feel threatened. 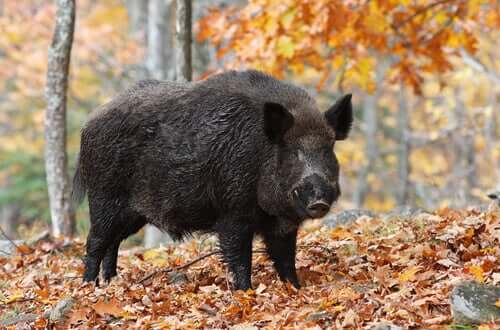 The wild boar lives in a herd and is a very social animal by nature. Their herds are matriarchies and they usually travel around led by one or more adult females accompanied by their young.

Despite having quite poor eyesight, wild boars have very sensitive hearing and sense of smell. In fact, they’re able to recognize a smell from more than 100 meters (330 feet) away. They’re also considered to be very intelligent animals, making them a great challenge for hunters.

Another thing they have to their advantage is their memory, and they’re capable of remembering previous threats or dangerous situations. All of these skills and abilities help them to easily adapt to their environment and survive.

The wild boar is related to the domestic pig, hence its similar appearance. Like pigs, wild boars have short legs and a stocky body. Their weight can vary according to species and genus, but they can weigh between 130 and 260 pounds.

The wild boar’s dominant feature is their tusks which protrude from their snout. They grow continuously throughout their lifetime and are sharpened consistently by the opening and closing of their mouths.

They have a thick coat which is dark when they’re young. In summer, it can be more reddish, and it then returns to a darker color in winter. Once a year, they shed their fur, although females and younger boars take longer to do this.

Wild boars move and live in herds made up of females and young males. Generally, males younger than two years of age remain on the periphery of the herd while older males are more solitary.

The wild boar is a nocturnal animal that stays in its shelter during the day. They start to move around at sunset and continue moving until night. They’re capable of covering 1 to 9 miles per walk, and almost always follow the same route.

In the mating season, the males solely dedicate their time to finding a female in heat. They abandon their solitary life to join a herd until they successfully win a female, which sometimes involves fighting with other boars.

The wild boar has a mainly omnivorous diet which includes cereals, seeds, and roots. However, they also get proteins from carrion, eggs, and worms, among other things.

Food is generally the determining factor when a herd decides to set up camp somewhere. They normally establish a shelter at ground level or dig a little lower using their legs and tusks.

Hygiene is an important part of their routine because they lack sweat glands. They regulate their body temperature using mud baths, and this habit also helps them to get rid of skin parasites.

Females are sexually active from the age of one year old. Their pregnancies last about three months and the litter can vary from three to six piglets depending on the mother’s age. When giving birth, the females move away from the herd and seek shelter beneath the trees.

Here are some of the key behavioral traits of the wild boar in their natural habitat:

Porcine Respiratory Disease Complex in Pigs
And one of the illnesses that pigs may suffer from is porcine respiratory disease complex. Find out all about it in this article. Read more »
Link copied!
Interesting Articles
Mammals
What Are the Differences Between Jaguars and Leopards?