These names should be easy to pronounce in order to say them out loud. Likewise, a dog shouldn't confuse his name with an order. Therefore, check out these dog names inspired by Greek mythology. 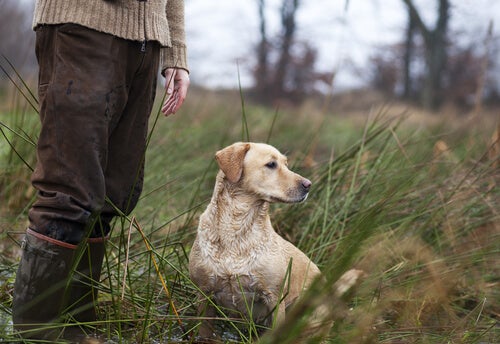 Naming a pet is always a difficult task, especially if he’s going to be your hunting partner. That’s why naming a hunting dog should be done carefully. In this article, you can take a look at some ideas for naming hunting dogs.

Picking out a name for hunting dogs should be a simple task to say. You’ll need to be able to shout them out in order to get your dog’s attention and have him bring back prey.

In addition, you should make sure the name doesn’t sound like any orders or words that are used to give orders to your dog.

So, here you can take a look at some hunting dog names from Greek mythology. These stories have several dogs as protagonists, especially hunting dogs. Below, you can read about some loyal dogs that could inspire you when it comes to naming your dog.

Argo was Odysseus’ hunting dog. Odysseus was the King of Ithaca and, after fighting the Trojan War, he returned home. He was disguised so he wouldn’t be recognized. Nobody recognized him except Argos, who spent 20 years waiting for his master. However, Odysseus had to ignore his beloved pet to not jeopardize his plan.

However, Odysseus couldn’t bear to greet his old friend and shed tears as he continued on his way. Poor Argos, after reuniting with his master, died at his feet. He had fulfilled his mission of guarding Odysseus’s home during his 20 years away. Wouldn’t Argos be the perfect name for a hunting dog?

The Hunting Dogs of Greek Heroes and gods

For the Greeks, among all the hunting dog names, there is one that stands out: Laelaps. Laelaps never failed on catching his prey. Zeus gave Laelaps to one of his lovers, Europa and likewise, the dog was giving to other people.

As Laelaps passed from owner to owner, he was sent out to hunt the Teumessian fox, which was a fox that could never be caught. This created an endless pursuit and paradox, causing Zeus to turn both the animals to stone.

Maera is another good name for a female hunting dog. Maera belonged to Erigone, who was the daughter of Icarius. The dog helped Erigone find her father’s grave. The loyalty between dog and owner was so strong that both committed suicide upon finding the grave.

Another dog name in Greek mythology is Orthrus, a two-headed dog who was Cerberus’ brother. Orthrus was in charge of protecting Geryon’s cattle and was eventually killed by Hercules.

Sirius is another one of the most famous dogs in Greek mythology. This dog belonged to Orion, who has a constellation named after him.  This could be another good option for naming a hunting dog.

Although Artemis is the goddess of hunting and not a dog, she was accompanied by a whole pack of dogs during while hunting. Honoring this Greek goddess is another option when it comes to picking out a name for your hunting dog.

Cerberus is another popular dog in Greek mythology. He was owned by Hades, the god of the underworld. Cerberus had three heads and guarded the gates of hell. He was very loyal to Hades and prevented the dead from leaving. Due to Cerberus’ loyalty, make his name another option to name your hunting dogs.

Interestingly, Norse mythology has an equivalent to Cerberus. Garm was the guardian of Nordic hell, which was the responsibility of Hel. Garm fought against Tyr during the dreaded Ragnarok.

Hopefully, some of these stories have inspired you to name your dog. If not, continue trying to come up with a different name! Remember, that the name of your pet is very important and choosing a name that speaks to you will create a stronger bond between you and your pet.