Symptoms of Venomous Bites in Dogs

There are several animals that can injure a dog with their venomous bite. For this reason, keepers should prepare for this during walks. 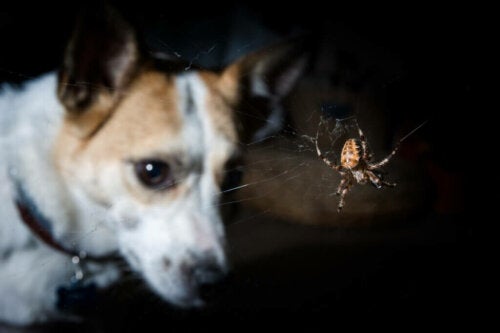 A dog’s curiosity is part of their heritage, and it’s most entertaining to see the animal searching and tracking on a day outdoors. However, this can sometimes turn out to be quite negative, especially if the dog suffers a venomous bite due to this curiosity.

Sometimes the symptoms of a venomous bite are difficult to identify and categorize. Luckily, there are some common patterns present in most of these unwanted accidents. Next, we’re going to explain the general symptoms of venomous bites in dogs.

Unfortunately, both in nature and indoors, there are several animals whose bites can be poisonous to dogs. However, these animals —in most cases— don’t usually use their weapons as long as they aren’t disturbed.

Unfortunately, dogs don’t understand “leave me alone”, so they disregard this rule. And, as a result, they  may receive a bite from an animal that wants to be left alone.

Many animals can give venomous bites or stings: from spiders, bees and wasps, to snakes, and even aquatic animals such as jellyfish or some fish. As there are so many poisonous animals, we’ll try to simplify and list a series of common denominators for all these venomous bites.

In this section, we’ll focus on bites from animals that aren’t too poisonous: such as ants, bees and some spiders. These animals’ bites don’t pose a risk to our pet’s life. However, it’s worth mentioning that, in certain circumstances, any bite —regardless of its source— can be fatal. For example:

Save for the above-mentioned exceptions, symptoms of these mildly venomous bites can be categorized as follows:

Fortunately, most of these accidents are caused by non-venomous bites. Consequently, the reaction usually diminishes without posing a major problem for the dog.

Now the topic becomes serious, as we’ll speak of venomous bites that pose a real risk to the animal’s life. Below, we’re going to focus on the bites of venomous animals such as certain snakes or spider species.

In these cases, the lesions may be similar to the ones mentioned above, but heightened to their maximum lethal power. The inflammation caused by a wasp’s sting will be much less than the reaction to a venomous spider’s sting. An example is the Chilean recluse spider, which is common in the Americas and has recently reached Spain.

The real problem of this sting doesn’t come from the area of the wound, even if these can cause significant injuries. The real risk of these venomous bites relates to the systemic reaction that can endanger the animal’s life. In such cases, we find the following symptoms:

As you can see, the symptoms of venomous bites can vary, from slight inflammations to complications as serious as convulsions. Preventing these accidents isn’t easy as they tend to happen when the owner least expects them. Therefore, it’s of vital importance to always have the phone number of a trusted vet at hand and consult him or her when these situations occur. In such cases, speed is key.

Three Puppies Trapped and Rescued in an Avalanche in Italy
In this article, we're going to tell you the heartwarming story of how three puppies were trapped under an avalanche and rescued five days later. Read on! Read more »
Link copied!
Interesting Articles
Animals
Omnivorous Animals: All You Need to Know