The Causes of Convulsions in Dogs

There are certain symptoms that, given their violent nature, cause dog owners to experience deep unrest. Today, we'll explain the possible causes of convulsions in dogs. 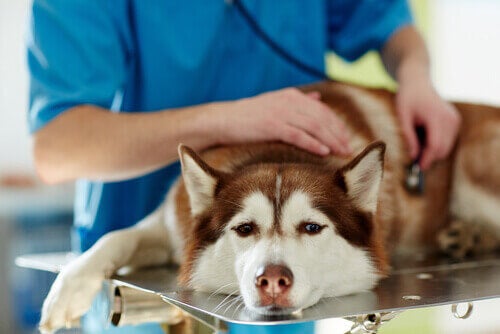 On most occasions, dog owners are the first to detect the symptoms of any illness their pets experience. Some of these symptoms can go unnoticed, including fever, paleness in the mucous membranes, or redness in the ears. Others, however, are much more noticeable given their nature. Such is the case with convulsions. In the following article, we want to take a look at the causes of convulsions in dogs.

This dysfunction occurs due to a sudden, massive, and synchronized discharge of cortical neurons. In other words, it’s as if all of the neurons, at the same time, suddenly go from being calm and relaxed to jumping out of control.

This temporary neural chaos produces the following alterations in a dog’s body:

It’s worth pointing out that this convulsive crisis is always a sign of illness, but not an illness in and of itself. Therefore, veterinarians will always approach the disorder as the tip of the iceberg. In other words, it’s a starting point from which to continue investigating in order to arrive at a proper diagnosis.

Causes of convulsions in dogs

We can divide the causes of convulsions in dogs into two groups in order to explain them more easily.

In this case, the alteration that’s producing the convulsive crisis is located within the brain. Any lesion that affects the cerebral cortex can lead to the appearance of convulsions in an individual. In general terms, we’re talking about:

Any of these anomalies can potentially cause a convulsive crisis. Logically, the above-mentioned circumstances and that characteristic neural revolution must take place. And this will depend on the region of the brain where injury exists as well as the severity of the problem.

Here, we’re going to talk about all of the causes of convulsions in dogs that aren’t the result of brain injury. In other words, the causes that don’t fall into the previous category. There are pathological processes that, though they develop far from the brain, they have a direct impact on this organ. And, therefore, can cause convulsions.

Occasionally, veterinarians are unable to determine what’s producing the symptoms because there’s no apparent or detectable cause. In these cases, we use the term “idiopathic” to refer to an illness with an unknown origin.

It turns out that, in many cases, diagnosing or finding the underlying illness isn’t possible. In fact, this is the most frequent cause of convulsions in dogs. However, with proper treatment, there’s usually a good prognosis.

In general, we’ve gone over the most frequent causes of convulsions in dogs. Just the same, the causes can be diverse and, in every case, require immediate action.

Therefore, if you suspect that your dog has suffered from a convulsion, seek immediate veterinary attention.

Muscle Spasms in Dogs: What to Do?
Muscle spasms in dogs don't pose a potential threat to an animal's life, but they can be painful. Also, they may be the indication of a serious condition. Read more »
Link copied!
Interesting Articles
Illnesses and Treatment
6 Genetic Diseases in Cats