The Behavior of the Irrawaddy Dolphin

Although its name comes from a river, the Irrawaddy dolphin lives on the coasts and in the salty waters of Southeast Asia. Similar to the beluga, it is very slow and easily caught in fishing nets, which is causing its rapid disappearance. 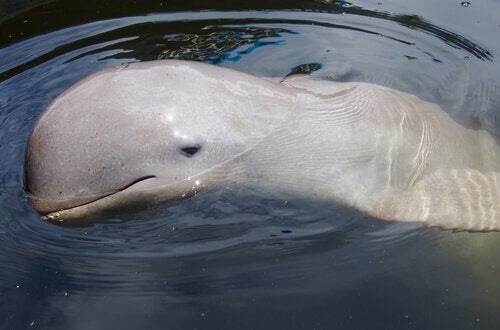 This marine animal, which lives on the coasts and estuaries of Southeast Asia, is in danger of extinction. This is mainly due to the accidental deaths caused by fishing in the region. In this article, we’ll tell you about the characteristics and behavior of the Irrawaddy dolphin.

Although from its name you might think that it’s a species found in the Irrawaddy river (which crosses Burma and China), this dolphin actually lives in the oceans and is rarely found in fresh waters.

Endemic to Southeast Asia, you can find these dolphins on the coasts and in the mouths of some rivers, such as the Ganges and the Mekong. However, it prefers tropical and subtropical waters. The Irrawaddy dolphin lives in Australia, Bangladesh, Burma, Cambodia, the Philippines, India, Indonesia, Malaysia, and Papua New Guinea.

Characteristics of the Irrawaddy dolphin

Similar to a beluga, the Irrawaddy dolphin – whose scientific name is Orcaella brevirostris – is a cetacean. However, unlike the other species in this family, it doesn’t have a rostrum, or beak. It has a round, blunt head. Its whole body is grayish blue with a lighter-colored belly. It can weigh between 200 and 450 pounds and measure up to 7.5 feet.

This dolphin has a triangular dorsal fin and two long, broad fins on the upper part of its torso. This makes it a fairly slow swimmer. In order to make a deep dive it lifts its tail.

Behavior of the Irrawaddy dolphin

This dolphin generally lives in small groups of no more than six specimens. At most, 15 individuals have been grouped together. They seek open water and food on the seabed.

The diet of the Irrawaddy dolphin is composed mainly of shrimp, although it can also consume other crustaceans, octopus, and fish. When they eat, they expel any ingested water through the hole on the top of their heads.

To communicate with each other, these dolphins make noises like hums or squeaks that have a frequency of up to 60 Khz.

These animals are somewhat timid and scared: they can dive into the water and remain submerged for 15 minutes without coming up to the surface to breathe. They also can swim faster than some other animals, reaching over 15 miles an hour.

The reproduction of the Irrawaddy dolphin

To reproduce, the male looks for a mate among his group. When he finds one, they intertwine facing each other, belly to belly. After copulation – which lasts less than one minute – they separate and leave in different directions.

The gestation period is 14 months. The female gives birth to a single young, weighing about 22 pounds. The female then breastfeeds for two years. These dolphins only reach sexual maturity between seven to nine years of age and can live up to three decades.

While these dolphins typically stay away from boats, they sometimes get caught up in fishing nets. Unable to come to the surface to breathe, they then die. This is one of the reasons why the Irrawaddy dolphin is in danger of extinction. There are also several other reasons, including water pollution, hunting for use in shows in water parks, and low birth rates in both the natural habitat and in captivity.

There are different projects and treaties in the works to prevent all these situations. For example, experts are showing fishermen how to take their nets out of the water quicker than they usually do, in order to let the dolphins come to the surface to breathe.

Discover How Dolphins Sleep
When it comes to how dolphins sleep, they need to go to the surface to breathe, which doesn't seem compatible with sleeping. How do they do it? Read more »
Link copied!
Interesting Articles
Mammals
Curiosities About the Black-Capped Capuchin

Animals
Discover Which Animals Use Echolation

Have you ever wondered how certain animals locate themselves in the sea or in the sky? Several scientists have asked…

Frugivorous animals are those that feed on fruits, either exclusively or partially. One-fifth of mammals belong to this group, which…

Blue animals are rare, although a few can be found in the sky and in the water. Why is this? Basically because of the pigments present in nature - mostly…