The Mule: A Stubborn, Perseverent Animal

This animal has significantly contributed to American agriculture. They are tireless in the face of hard work. The creation of the species is entirely due to human intervention. In fact, it was specifically the idea of former President George Washington to breed a Spanish donkey with an American mare. 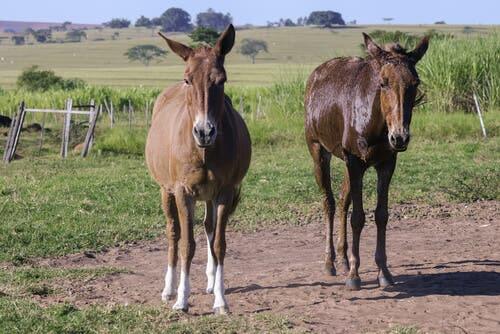 The mule has been with us since the beginning of human history. We’ve all seen these animals as one of the main characters in Christmas nativity scenes. Stay tuned and discover all about this animal’s origin and history. Let’s take a look!

Origin of the mule

“You’re as stubborn as a mule!” Have you ever heard this phrase? You probably have, and that’s because, since ancient times, people knew this animal for this stubbornness. In fact, there’s a Bible story about a mule who saw an angel. Although the owner beat the mule, it refused to move.

This well-known phrase is actually from Missouri, because this animal often refuses to plow. While the mule has a long history of coexistence with humans, it isn’t easily domesticated and is very independent.

Over the years, people stopped using this animal for transportation and farm work. People replaced mules during industrialization and as they discovered the ease of using other animals.

The arrival of the mule in the United States

George Washington was the first President of the United States. However, before becoming president, one of his hobbies was agriculture. In 1785, King Carlos III presented Washington with a Spanish donkey.

However, there wasn’t much hope for this procreation of this animal. The donkey didn’t seem to have any sexual desires and all attempts to breed with a female were unsuccessful. After months of trying to breed the donkey, Washington gave up and moved on to plan B.

He had the idea of crossbreeding the donkey with the best American mares. As a result, the mule that we know today emerged: a stubborn, hard-working, and sterile animal.

The mule is very similar to the donkey. In fact, few people are able to tell them apart. However, there are characteristics that demonstrate the differences between the animals. For example, mules have a height, neck shape, and rump that are more similar to horses than donkeys. Also, their teeth and coat are very different from donkeys.

Humans have used mules as a working animal for years, thanks to their resistance to disease and their hard hooves.

The mule isn’t as stubborn as you think. However, they do demand respect. For example, when you want to train a mule, you have to do so with patience, kindness, and affection. Eventually, the animal will learn to trust the human and obey.

However, mules become stubborn when they’re threatened, mistreated, or feel like they aren’t being understood. This is just a genetic feature of the animal.

Before, we mentioned that mules are sterile. This is true for the majority of mules. However, there have been a few exceptional cases in which mules have been able to have a single calf.

This inability to reproduce is because male mules can’t impregnate females. They have a problem with their semen that prevents them from being able to fertilize the female. The problems stem from the high number of chromosomes in the animals the mule comes from – 64 in horses and 62 in donkeys.

Once again, although you probably don’t interact with these animals regularly, it’s interesting to know about their origins since they have been companions to humans since ancient times.

Differences Between a Donkey, Mule, and Ass
Although many people confuse them, and talk about a donkey, a mule, and an ass as if they were the same animal, the truth is that there are some noticeable differences between them.  Read more »
Link copied!
Interesting Articles
Dogs
Scent Games for Dogs: Brain Stimulation Through Smell