Both the polar bear and the brown bear have given rise to a fertile new species, the grolar bear. Find out more about them below! 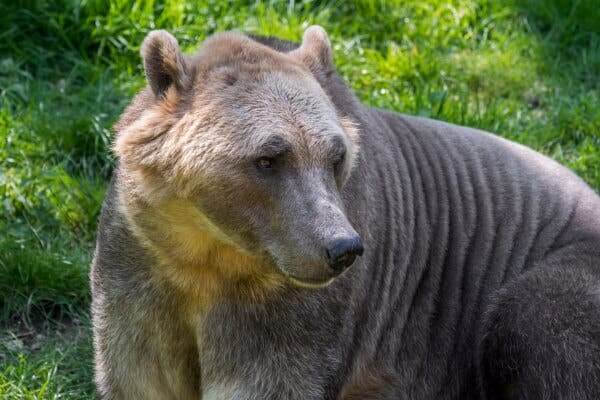 Animal hybridization in nature is more common than you might think. However, it’s true that some of the best-known examples of this are a product of human intervention.

Generally speaking, the most famous case of animal hybridization is the mule, which is the cross between a donkey and a mare. Nevertheless, there are many other equally interesting examples. The case of the grolar bear hybrid is one of them, and we’ll tell you all about it.

The crossing or hybridization between animals (or plants) of similar species, from an evolutionary point of view, may lead to the emergence of a new species. Hybrid descendants are sometimes sterile and will be the only individuals alive.

However, crossbreeding between species can generate fertile hybrids, i.e. specimens that can produce offspring. In addition, if the environmental conditions are favorable, a brand new species can result from such hybrids.

Nevertheless, one of the factors that favor the appearance of a new species is isolation. Charles Darwin noted that isolation along with long periods of time supports genetic diversity and differentiation between species. This is why it’s so interesting to study animal hybridization.

A specific case of animal hybridization: The grolar bear

One of the most curious hybridizations that have occurred in nature has given rise to the grolar bear. Below, we’ll discuss this amazing animal in more detail.

The grolar bear is a hybrid animal resulting from the cross between a Polar bear (Ursus Maritimus) and an American Grizzly bear (Ursus Arctos Horribilis).

Being a hybrid, the grolar bear (Ursus Arctos x Maritimus) shows characteristics of both the polar bear and the grizzly bear. Its fur tends to be either brown or a mixture of brown and white.

Compared to its ancestors, the grolar tends to be of an intermediate size. It can measure around 6.5 feet tall when standing on its hind legs and can exceed 4 feet high while on its four paws.

The grolar bear is a fairly agile animal considering its size. In addition, these bears are more vigorous and possess greater strength than their predecessors, which they put to good use in their hunting.

Another curious fact about these bears is that they’re able to run up to 30 miles per hour without exhausting themselves.

Its strength and agility, combined with other physical traits such as long claws and highly developed muscles, make the grolar bear a great hunter.

Given the advantages of these physical characteristics, these bears have been able to capture big prey such as deer or caribou.

It’s true that hybridization can give rise to specimens as interesting as the grolar, which even has several advantageous characteristics. Nevertheless, animal hybridization also has a number of negative aspects.

For example, if two grolars mate with each other, their descendants will have an increased risk of developing malformations.

Another negative aspect is that their large size prevents them from climbing trees. The latter hinders one of the most common defense reactions bears have in the face of danger.

Experts have come to the following conclusions after studying this new species of bear and their behavior:

The most common locations where we can observe these animals are wooded and mountainous areas. Especially in the northern regions of Asia, Europe, or North America. Usually above 4,000 feet and up to 5,500 feet above sea level.

However, the largest population has been located in Alaska. In addition, experts consider it the most widespread bear species on the whole planet.

Despite being omnivorous animals and excellent hunters, fish and meat are not found in their daily diet. They usually feed on fruit, leaves, roots, or vegetables, which can be easily found in the forest.

Grolar bears are animals that have a very specific diet, thus they are susceptible to change.

How did the grolar bear appear?

Hybridization between the polar bear and the grizzly bear is one of the cases in which human beings haven’t intervened. The one responsible for its appearance has been nature itself.

It’s believed that its appearance was influenced by climate change. The polar bear had to explore other territories in search of food and eventually reached the rivers where grizzly bears hunted for fish.

As a result, the grolar bear is a fertile hybrid whose appearance has been motivated by climate change. At first, it was more common to find them in zoos, but there are now wild populations in protected territories.

What do you think of this new species?