What a Dog Feels When it Looks at You

In this article, discover what a dog feels when it looks at you. With this, it may be trying to understand your feelings so it can respond to them accordingly. 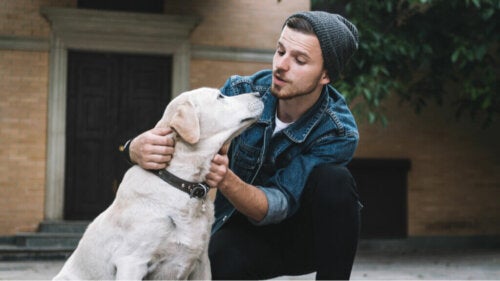 Any dog owner will agree that establishing eye contact with their dog is more than just a sensory experience. It’s common for people to describe their dog’s gaze as one full of emotion, love, and intention. “My dog speaks to me with its eyes.” In this article, discover what a dog feels when it looks at you.

This expression is much more scientifically founded than you might initially believe. Although a dog’s look contains many secrets, it’s main function is empathy.

If you want to know more about this beautiful and useful interspecific interaction, we encourage you to continue reading. Remember that, although it may not seem like it, everything has a meaning in the animal world.

The importance of communication

Emotion recognition allows animals to evaluate the intentions and motivations of other dogs. This gives them the ability to respond appropriately and anticipate events.

In addition, this allows them to maintain long-term relationships and avoid conflicts that don’t benefit anyone. Thus, beyond mere altruism, animal empathy has a huge adaptive value.

The ability to recognize and respond appropriately to stimuli increases the survival of both the sender and the receiver.

All this is applicable for individuals of the same species. In fact, it’s also applicable when communicating with living beings of other genera and orders. As is natural, dogs learn to identify human expressions as their life literally depends on correct communication.

What a dog feels when it looks at you

When a dog fixes its gaze intently on its owner, it’s trying to understand them. A scientific study tried to quantify the effectiveness of this relationship. These are the steps the researchers followed:

The results weren’t surprising and highlighted a very important fact. Dogs integrate human emotions not only by looking at their face but also by understanding the sounds they make with them.

The fact that almost 70% of the dogs paid more attention to the faces that presented vocalizations congruent with facial expressions (happy sound with a happy face, for example) evidences this.

Such is the level of canine compression that some scientists estimate that this capacity is comparable to that of a small child up to two years of age.

For example, a dog perfectly understands that licking makes their owner feel good. Therefore, it classifies it as a positive stimulus in times of difficulty and stress. It isn’t a coincidence that dogs show particular affection when they see someone cry because they understand the situation.

When a dog looks at their owner’s face, they understand their emotions and even feel them. For example, stress is a sensation that a dog makes its own when it observes it in the family environment.

In addition to perfectly distinguishing tones and mood swings in humans, dogs are able to integrate the hormones that we produce in states of danger, fear, and anxiety through smell. In many cases, this also generates negative responses in the animal.

What a dog feels when it looks at you: empathy is the key to cohabitation

As you’ve seen in this article, when a dog looks at your face, it’s trying to understand you. But visual communication also responds to other needs. For example, the dog may also be trying to express some need or discomfort.

It’s essential for owners to understand that emotions also affect the well-being of their pets. Dogs are capable of understanding stress and fear. But beyond integrating these emotions, they even feel them as their own.

It’s natural for people to go through bad times. Thus, we want to make it clear that owners shouldn’t have to avoid crying in front of their pets. On the contrary, during these moments, they need love or affection more than ever.

However, you should, of course, avoid yelling or loud noises at home, even though you may be going through a stressful time.

Animal Emotions – Can Dogs Cry Like Humans?
We all know that dogs are more than capable of vocalizing to let us know how they're feeling. But can dogs cry like humans? Read more »
Link copied!
Interesting Articles
Mammals
The Golden Lion Tamarin: Between Threats and Benefactors