5 Animals that Jump the Highest

Mammals, amphibians and insects all jump to move around. In this article, we'll tell you about five animals that jump the highest. 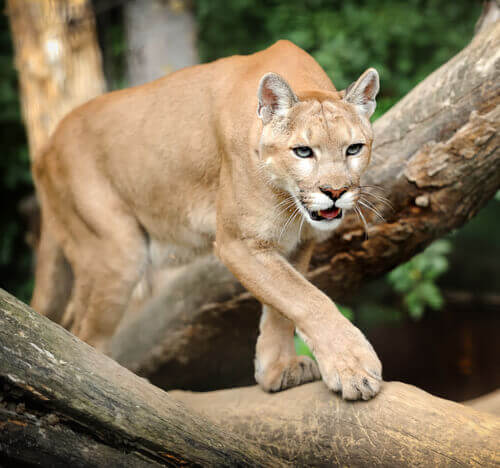 Which are the animals that jump the highest? Will our champion jumper be a mammal, an insect, or an amphibian? In this article, we’ll tell you about different species who are able to jump several feet high, and others who can even jump a height twelve times their size.

5 animals that jump the highest

Each of the species on this list has earned its spot. By using different techniques, and due to their physiognomy, they’re the animals that jump the highest. Keep reading!

The mountain lion—which is in the cover photo of this article—is native to America and is a carnivore. Also, they’re the largest felines on the entire continent and they can adapt to many different ecosystems. They mainly eat ungulates, but if food is scarce they’ll settle for insects or small mammals.

This large animal is an expert ambush predator; it hides among the trees and waits for hours for the right moment to jump on its prey. Then, it will attack and bite its neck. Because of its amazing strength and vigor, the puma can jump almost 40 feet horizontally and 13 vertically. Its hind legs are very powerful!

When we’re talking about the animals that jump the highest, it’s no surprise that we’ve included the kangaroo. This animal is an excellent jumper. Like most marsupials, it has two very well-developed hind legs—unlike its front legs which are short and thin—that allow it to jump and cover a lot of distance in a short time.

Also, their legs help them escape danger. These animals can’t walk, so they have no choice but to jump!

Despite having to jump, kangaroos are very fast and can reach 44 mi/h if they’re only going short distances. Also, in terms of how high they can jump, kangaroos effortlessly reach ten feet to get over certain obstacles. In addition, it’s worth noting that they use their tails as a third leg, and it makes them faster and stronger.

Within the large family of tree frogs, we’ll highlight one that’s green with red eyes. This frog lives in Mexico, Colombia, and Venezuela. Also, it’s unique because of the strident colors of its body and its pupils. In addition, they have three toes on each leg, which are well separated from one another.

This amphibian is nocturnal and spends a lot of time among the leaves and branches. That’s where it feeds on insects and protects itself from predators using a toxin that its skin produces. Also, females are larger than males, and they can jump up to 150 times their body size thanks to their powerful back legs that stretch out fully.

Caelifera are a large family of insects commonly known as grasshoppers. They have short antennae and large eyes. In addition, they’re herbivores and many farmers consider them pests for their crops.

Thanks to their strong, long hind legs, they can jump up to twenty times their body length. In addition, they have two pairs of wings, but they only use the rear ones to fly if necessary. Another inherent characteristic is that they make loud noises when they rub their wings against their femurs.

The last on our list of animals that jump the highest is the flea. We couldn’t leave out the parasite that all pet owners despise. Fleas have very well-developed hind joints that allow them to jump up to 40 times its size. This helps it move from host to host.

Fleas basically jump to survive: each time they do so they bite their host’s skin and draw their blood. The most interesting thing about its jumping mechanism is that its hind legs have spines to hold onto and, when they release them, the flea is catapulted into the air.

There are many animals that can also jump very high that we weren’t able to include on our list of the five animals that jump the highest. For example, mountain goats, rabbits, dolphins, impalas, gerbils and hares. But we hope you’ve enjoyed learning about the five that we’ve featured!