The Puma Is The Great American Predator

This great American predator, which is in danger of extinction, shows off its speed, dexterity, agility, and power. The puma is capable of jumping six meters in height and up to 10 meters in length. 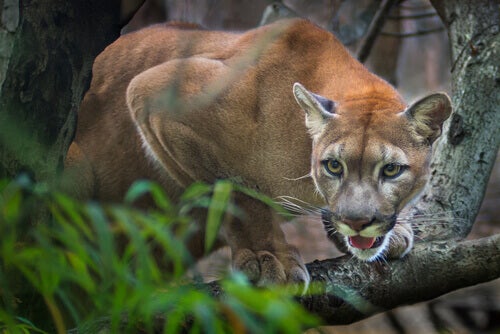 The puma, also known as the cougar or the mountain lion, is one of the largest feline predators on the planet. Its body has adapted perfectly to reach great speeds and make long jumps, making it an excellent hunter. Human intervention, whether for sport hunting, for the expansion of cities, or the protection of livestock, threatens the puma’s ecosystem and survival. Currently, this species is at risk of extinction in many countries where it’s native. Below, you’ll learn more about the great American predator, its characteristics, behavior, and habitat.

The puma: physical characteristics and taxonomy

The puma, whose scientific name is Puma concolor, is a carnivorous mammal belonging to the Felidae family. Its body is long and robust and possesses an even coat in brown or golden shades. Its head is round and its ears are always erect. What’s more, its legs are powerful and muscular, with five claws on the front legs and four on the hind legs.

The body of an adult male puma can reach 9 feet in length and weigh between 200 and 265 pounds. However, this species has a certain sexual dimorphism: Females are smaller and lighter than males. A female specimen is between 5 and 6.75 feet and weighs less than 176 pounds.

Their hind legs are notably larger and more muscular than the front ones. This allows them to perform really long jumps and gain an impressive speed for short runs. While their horizontal jumps are usually over 33 feet, their vertical impulses can reach 20 feet high.

Like most felines, cougars are also capable of climbing with skill and speed. On many occasions, a specimen can be seen while resting or watching its environment by climbing to the top of a tree.

This is an impressive adaptive capacity if we consider their size and weight. The great size, intelligence, and hunting ability have made this great American predator one of the most powerful on the planet. Its life expectancy is between eight and thirteen years.

The natural habitat of pumas

The puma is a feline native to America, which predominantly inhabits the southern region of that continent. They prefer to live in mountainous or jungle regions, with temperate climates and good availability of food.

Originally, they were found in Argentina, Brazil, Chile, Colombia, Costa Rica, Paraguay, and Uruguay. In Argentina, pumas are officially classified as Least Concern (LC). However, the species was totally extinct in many provinces of the country.

For this reason, some areas are being repopulated, such as the provinces of Corrientes and Entre Rios and also Patagonia. Furthermore, pumas are protected thanks to the creation of National Parks, recognized by local legislation.

Feeding of the puma

As they originally inhabited regions of abundant fauna and flora, pumas used to maintain a very varied diet. In fact, they’re the felines with the greatest food diversity. Although they’re predominantly carnivores, they also tend to consume certain vegetables. In addition to complementing their diet, vegetables provide fiber and facilitate their digestion.

A puma can hunt large prey such as deer, elk and sheep, but also small animals such as hares, mice or porcupines. In addition, they’re also capable of catching tiny insects when hunting seems insufficient or difficult to capture.

The habits of the great American predator

As a good feline, the puma maintains solitary habits and is very territorial. Males and females that are sexually active usually get together only for reproduction purposes. However, some females may form small groups to protect their young and ensure their feeding.

Pumas are also known for their hunting strategies. In order to catch their prey, they elaborate a sophisticated ambush and always stay behind another animal. Thanks to their retractable pads and claws, they can move forward silently and jump at just the right moment. Then, they use their claws to immobilize and bring down their prey.

Once they’ve dominated their prey, these cats cat take their kill to a safe place to feed in peace. Normally they catch large animals every 15 days, but they can increase their hunting frequency to feed their cubs.

The puma is a sleepy animal during the day and spends long hours resting among the branches of the trees. Its activity increases at dusk or before dawn, in the early morning, when the sun is more tenuous.

5 Extinct Wild Cats
Besides humans being responsible for some extinct wild cats, others disappeared because of changes in the planet's ecosystem.  Read more »
Link copied!
Interesting Articles
Mammals
The Elephant Seal, a Lifetime in the Cold