How Do Large Felines Hunt in the Wild?

Everyone knows that lions are the "King of the Jungle", but they're not the only cats that dominate in nature. Take a look at how 4 large felines hunt in the wild. 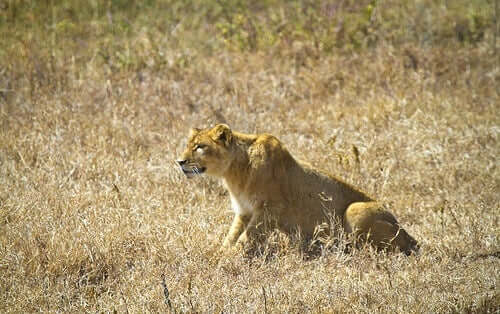 When we talk about large felines, images of our domestic cats come to mind. This group of predators rules over a great part of the ecosystems of our planet and they possess great ecological success.

This is thanks, in part, to their different techniques for overcoming their prey. In fact, they possess some of the best hunting techniques in all of the animal kingdom.

We should remember that, when we talk about these great felines, we’re referring exclusively to those that roar. In other words, the four species that belong to the genus Panthera

Despite that, there are some authors that include other species that are incapable of roaring, such as the snow leopard, the cheetah, and the puma (or mountain lion).

Lions (Pantero leo) are one of the few feline species that live in groups–or prides. This has allowed them to develop hunting techniques that are different than those of other large felines. As a result, they are able to defeat much larger prey.

When it comes to the lions and hunting, females are no doubt the protagonists. Lionesses organize hunting groups, stalking flocks of hoofed animals from several different strategic points.

Prey tends to be a weaker animal, and these cats have a predilection for young mammals of medium size. However, on some occasions, lionesses may try to hunt buffalos, hippopotamuses, and even elephants.

Lions, unlike other large felines, live in very open spaces with little vegetation. As a result, hunting groups must make up for the lack of plant covering when they hunt their prey.

Prey tends to be some weaker animal, and these cats have a predilection for young mammals of medium size. However, on some occasions, lionesses may try to hunt buffalos, hippopotamuses, and even elephants.

Leopards, the most versatile large felines

Leopards (Pantera pardus) are one of the feline species with the greatest distribution in the world. We can find them in many parts of Africa and Asia, and they have adapted to living in a number of habitats. As a result, this species has a greater variety of prey than any other large feline.

In fact, experts have spotted leopards eating everything from insects to male antelopes weighing no less than 1,980 pounds. However, a leopard’s prey usually weighs about 175 pounds, a number that’s in no way negligible for their health.

Some of the many different animals they hunt include baboons, fish, snakes, cheetahs, cubs, and crocodiles. However, leopards are felines that weigh no more than 200 pounds, so they tend to act very carefully.

Leopards not only hunt their prey among bushes and weeds. They also have the great ability to jump and to climb trees, which they take advantage of to hunt tree species. This predilection for trees also allows them to protect their feasts. Otherwise, hyenas and other great felines, such as lions, may take their kills away.

The jaguar, the best biter

Jaguars have a very similar strategy to that of leopards. However, jaguars (Panthera onca) are very solid creatures and have one of the most powerful sets of jaws in the whole animal kingdom.

This, along with their predilection for water, makes them one of the few felines with a habit of eating tortoises and crocodiles. Their bite is so powerful that they are able to break through a tortoise’s protective shell.

What’s more, given the tremendous strength of their jaws, jaguars are able to kill their prey by breaking the skulls of their victims. Other felines kill by suffocating their prey.

It’s important to remember that this feline lives in South America and that its prey usually consists of large mammals. For example, they hunt deer, capybaras, and tapirs.

Unlike lions, jaguars are don’t tend to chase their prey very much. Rather, they prefer to deliver a fatal hit to their victims from their hiding spot.

Tigers (Panthera tigris) are native exclusively in Asia. However, they inhabit a variety of habitats and there are multiple subspecies of different sizes. The largest tiger subspecies is the beautiful Siberian tiger.

Tigers feed mainly on large hoofed animals, although they can also hunt peacocks, fish, and hares. At the same time, they also eat other predators, such as leopards and pythons.

These felines use their immense strength to defeat their prey in one shot. And though prowling precedes any attempt to hunt, tigers have no problem reaching up to 55mph to reach their prey.

Although tigers also suffocate their victims, strength and power are especially important in this species. This is because they are able to make giant leaps in order to overcome their victims.

Unfortunately, all of these species are under the extreme threat of human activity, especially the destruction of their natural habitat. This is a problem that affects every large feline species on the planet.

5 Extinct Wild Cats
Besides humans being responsible for some extinct wild cats, others disappeared because of changes in the planet's ecosystem.  Read more »
Link copied!
Interesting Articles
Mammals
Meet The American Black Bear: Characteristics and Habitat