The Cheetah: Habitat, Characteristics and Behavior

In this article, we want to take a closer look at one of the world's most famous big cats: the cheetah. 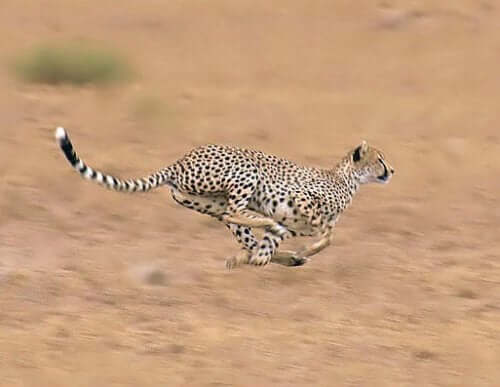 The cheetah is a beautiful and awe-inspiring animal, and one that is instantly recognized the world over. Elegant and striking, they’re natural hunters. Today, we want to tell you a bit more about them.

Everything you need to know about the cheetah

On average, cheetahs measure between 43 and 60 inches in length, not including their tail, which measures approximately 24 to 32 inches. They can weigh anywhere between 77 and 132 lbs, with a height of 30 to 35 inches at the shoulders.

Cheetahs always have spots. Their coats are pale yellow or dark cold in color, with distinctive black rosettes. Their fur isn’t very long, but is very soft.

The cheetah: history and habitat

According to researchers, it seems that the cheetah migrated from North America to Africa around 100,000 years ago, and Africa remains its home still today. It’s also said that they’re descended from North American cougars. However, it seems that the cheetah preferred the tropical climate of Africa to the cold American winters.

However, evidence suggests that, at one point in time, cheetahs were unable to care for and protect their cubs, and were on the verge of extinction. As a result, there were only a few sets of breeding pairs, which is why all cheetahs display similar physical traits today.

In spite of their great strength, cheetahs often had their prey stolen from them by scavengers. As a result, they adapted their habits over time, and are now active during the day rather than at night. That way, they could stay ahead of their competitors.

One of their greatest assets is their keen eyesight. In fact, maybe the saying should be cheetah-eyed rather than eagle-eyed…

In spite of all that, cheetahs are fairly cautious animals when it comes to hunting. For example, a hungry lion will waste a lot of energy hunting prey that it might not even catch. The cheetah, on the other hand, will wait until it’s sure the hunt will be successful.

To make sure they get it right, cheetahs study the terrain carefully before choosing their hunting tactic. If the ground allows them to approach stealthily, they will try to attack from the closest position possible. But if the terrain doesn’t allow them to watch their prey from up close, then the chase will start from further away.

Cheetahs are a polygamous species, meaning the females will look for multiple mates. Each litter will be made up of 2 – 4 cubs, with each weighing just over half a pound at birth.

Once it’s given birth, the female cheetah will wait until nightfall before moving her cubs to a safe place where she can protect them from predators. Lions, hyenas, and other types of big cat often lie in wait, and will take cheetah cubs if given the chance. This is where the cheetah’s habit of hunting during the day becomes a huge advantage, as they can protect their cubs at night while other predators are active.

The cubs can’t follow their mothers on their own four paws until they’re around 4 weeks old. It’s difficult for them to adapt to the world, with the extreme temperatures and dangerous surroundings meaning that only 30% of cheetah cubs survive past the first three months.

Male cheetahs are not involved with raising the cubs at all, whether it comes to caring for them or feeding them. The females take care of everything, including teaching them to hunt. They often practice their hunting skills on young gazelle, which their mothers will bring them in order to awaken their hunting instinct.

We hope you’ve enjoyed learning a bit more about these incredible animals. Very few people are lucky enough to see them in the wild. However, getting to know them better can help you feel a little closer to them.

Cheetah Conservation and Genetic Traits
Cheetah conservation is vital for the survival of this species. Amazingly, it's its own genetic makeup that threatens to destroy it.  Read more »
Link copied!
Interesting Articles
Invertebrates
5 Interesting Facts about Soldier Ants