The 8 Strongest Animals In The World

In today's article, we'll show you 8 of the strongest animals in the world. Will any of them surprise you? 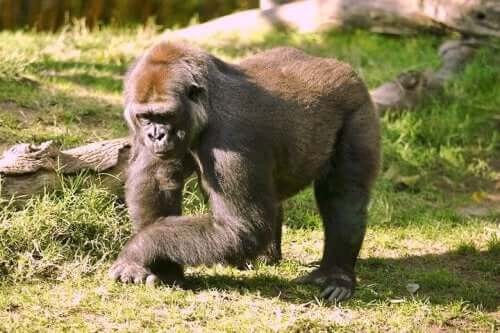 Would you like to learn about the strongest animals on the planet? While they’re not necessarily the largest species, they have the ability to lift objects their own weight or heavier. Keep reading, and we’ll tell you all about them.

What are the strongest animals in the world?

They can move heavy objects from one place to another, or travel huge distances carrying food weighing several pounds. In this article, we’ll tell you about some of the strongest animals in the world:

Not only are they one of the largest animals on the planet, but anacondas are also one of the strongest. They can weigh up to 550 lbs, and measure over 30 ft. They feed on birds, deer, rodents, wild pigs, turtles and even jaguars, and have the ability to kill their prey by squeezing and suffocating them.

Every time the animal tries to take a breath, the anaconda will squeeze even tighter. And that’s not all: their stomachs are designed to digest prey whole within just a few days. They can then go months without eating.

Famous for their majestic appearance and impressive wingspan, number two on the list of strongest animals in the world is the eagle. They use their claws and large, curving beaks to tear off chunks of meat, and can easily kill a deer or a monkey. Their powerful eyesight means they can spot their next victim from over 2 miles away. In flight, they have the strength to carry prey weighing up to 13 lbs.

3. The strongest animals in the world – oxen

Oxen are strong animals, and have been used by humans for centuries. They can plow fields, pull machinery or carts, grind grain etc. Furthermore, oxen have great stamina, and can work for hours on end. While they’re not that fast, they can pull extremely heavy loads (up to twice their weight) with ease. They also have a fairly long lifespan.

Grizzly bears are native to North America, and are one of the largest bear species in the world. When standing, they can measure over 6 ft, and weigh almost 800 lbs. Their claws can easily tear into prey, including elk, deer, sheep, fish, birds and even black bears. They’re known for their great strength and aggressive behavior, and will fight other bears over prey or territory.

The gorilla is the largest primate, and one of the strongest animals in the world. After chimpanzees and bonobos, they’re the next closest living relative to humans. In the wild, they can weigh over 1500 lbs, and measure over 6 ft. Gorillas are 6 times stronger than humans. They have powerful arms, and can lift objects almost their own weight.

6. The strongest animals in the world – rhinoceros beetles

Not all of the world’s strongest animals have the imposing physique of a gorilla or a bear. There are also some smaller creatures which, in comparison to their size, can lift very heavy weights. One such animal is the Hercules or Rhinoceros beetle, which can carry objects up to 850 times its own weight. That’s the equivalent of a human trying to lift 9 elephants. The males have curved horns on their heads, which they use for camouflage and protection rather than stinging or biting.

These miniature behemoths mainly live in America. Leaf-cutter ants live in anthills up to 100 ft deep, and in colonies of around a million other ants. They’re unbelievably strong, thanks to their three pairs of spines, and can lift and transport objects up to 50 times their own weight.

Today there are 5 species of rhino living wild in Asia and Africa. The name rhinoceros comes from the Greek “rhino” (nose) and “kera” (horn). They’re large, herbivorous animals, with tough, thick skin and a rather small brain in comparison to their size.

While their eyesight isn’t great, they have an excellent sense of smell, and fantastic hearing. Rhinos are solitary animals, and will happily take on any intruders invading their territory. When fighting, they avoid charging at one another, as their strength would be enough to crush their own skulls or snap their own necks.

The 10 Fastest Animals in the World
In this very interesting article, discover the ten fastest animals in the world. Read on to learn all about these amazing animals! Read more »
Link copied!
Interesting Articles
Birds
Tips for Raising Domestic Turkeys