8 Feline Species That Live in the Wild

If you're a cat lover, don't miss today's article on 8 feline species that live in the wild. Can you guess which they are? 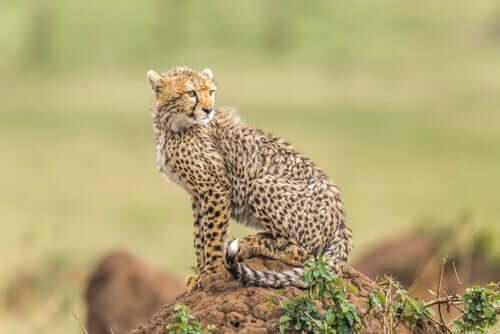 This family of meat-eating mammals have slender bodies, an acute sense of hearing, and exceptional sight. What’s more, they’re very stealthy and feed on live prey. At the same time, they can retract their sharp claws when they’re not using them (with the exception of the cheetah). These mammals live all over the world, except in Oceania and Antarctica. In the following article, we’ll tell you about 8 feline species that live in the wild.

If you have a cat in your home, then you’ll definitely want to know about the great variety that exists within your pet’s family. The most well-known feline species that live in the wild are the following:

Tigers belong to the Panthera genus, live only on the Asian continent and consist of 5 subspecies. Along with the lion, they are one of the two largest feline species that exist. They tend to live alone, are very territorial, and inhabit forests and savannas.

What’s more, these enormous cats hunt both medium and large animals, are excellent swimmers and have a tremendous ability to roar. The tiger’s worst enemy is man, given our tendency to hunt them to obtain their precious fur.

Lions live in disperse populations throughout Subsaharan Africa and India. As for females, they have a life expectancy of 14 years, while males only live an average of 8 years. Male lions are easy to recognize given the long mane that surrounds their face.

Lions possess a powerful jaw and large teeth in order to kill large prey. In regards to reproduction, they mate during any season of the year and gestation lasts for 110 days. Their litters can consist of up to 4 lion cubs.

Jaguars are just one of the several feline species that inhabit the American continent. In comparison to other species, the jaguar is the third-largest in the world. It’s similar to the leopard, but greater in size. What’s more, it prefers humid jungles.

These cats live on their own, hunt by ambushing, and crush the temporal bones of the skulls of their prey. At the same time, their young are born blind following 100 days of gestation. They depend completely on their mothers, who accompany them until they reach the age of 2.

Another feline species with a powerful roar is the leopard. Interestingly, in ancient times, leopards were believed to be a cross between a lion and a panther. In regard to their habitat, these felines have developed in various ecosystems, with the exception of deserts, and they look for spots where they can hide.

All of their claws are retractable, and they possess 4 fingers on their back paws and 5 on their front paws. They are solitary cats, except during mating season. Gestation lasts for three months and females can give birth to litters of up to 6 cubs.

This feline lives in the mountains at up to 19,000 feet above sea level. It has a tail that’s almost as long as its body, which helps the cat to keep warm. The snow leopard is a daytime hunter and will go after any type of wild animal it comes across.

The gestation period of the snow leopard lasts 100 days. Females can deliver up to 5 cubs, which stay with their mothers until they are 2 years old. These are the only species among the Panthera family that doesn’t roar.

While the cheetah is somewhat unique, it also belongs to the same family as the other felines. It’s the fastest animal on the planet, reaching speeds of up to 70 mph. Its main prey is the gazelle, although it will also attack impalas, wildebeests, and zebras. These cats cannot roar, nor can they retract their claws.

When we look at the way in which they reproduce, it’s important to point out they’re polygamous. Gestation lasts for three months and females give birth to four cubs, at most. The mortality rate of cheetah cubs is quite high during the first three months of life.

This great feline lives mainly in America, especially in Canada and in the Patagonia of Argentina and Chile. This feline species is the fourth largest of its family and lives for approximately 10 years. It feeds mostly on deer and guanacos (a close relative of the llama).

Pumas prefer habitats with plenty of vegetation where they can prowl without being discovered. However, they also live in open areas. They are very territorial animals and excellent predators. As for their young, females take on the task of raising them on their own.

Wildcats inhabit Africa and Eurasia and consist of various subspecies: the European, the Asian, and the African wildcats. On several occasions, these animals have interbred with domestic cats.

Weighing up to only 13 kg, these are the smallest cats on our list. Their coats are grey with hints of yellow. Wildcats mate once a year, and females use caves and empty burrows to give birth and protect their young.

Discover How Lionesses Hunt Their Prey
Did you know that female lions are responsible for finding food for their prides? Today we'll tall you more about how lionesses hunt. Read more »
Link copied!
Interesting Articles
Mammals
What Are the Differences Between Jaguars and Leopards?