All About the Behaviour and Characteristics of Opossums

Opossums are one of the oldest mammals in the world. Scientists have found fossils of this species dating back to 65 million years ago, the period in which the dinosaurs became extinct. 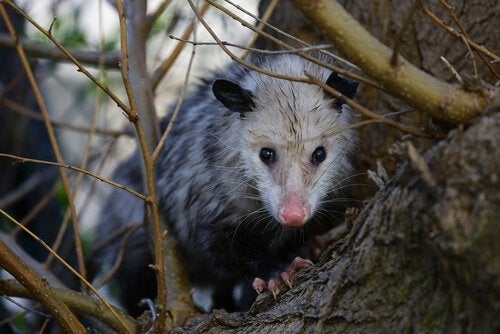 Opossums are one of the most well-known marsupials in the world. There are almost 100 different species of this mammal on the American continent alone. Their physical resemblance to rats causes an aversion in some people. However, this friendly animal doesn’t pose any of the kinds of risks that rodents do. Find out with us all about the behaviour and characteristics of opossums in today’s article.

One of their main characteristics of opossums is how docile they are when they interact with humans. So much so that some bold people acquire them as exotic pets and brag about them.

However, the care and attention this type of animal requires is often greater than the ‘good intentions’ of those who buy or capture them. In many cases, they end up releasing them into an unfamiliar habitat, which means certain death for them.

Another reason why opossums die is because of how clumsy they are when walking, which often causes them to be run over by cars. As a result, hundreds of female opossums die while carrying their pups in their pouch or marsupium. Consequently, this leaves them orphaned and with little chance of survival.

Behaviour and characteristics of opossums

In some places, they are known as pouched foxes. The characteristics of opossums include their small and bright eyes, which fit perfectly into their heads, and their elongated snouts. Also, their coats can vary in color between gray, brown, black and white. However, their tails are devoid of fur, which helps them to hang on to tree branches better.

Just like primates, they have large opposable thumbs; however, they don’t belong to that ancestry. As a result, they are great climbers. They never grow more than 40 centimeters in length — not counting the tail — and can weigh up to five kilos. Their life expectancy is around eight years.

This marsupial’s behavior is unpredictable and, although it tends to be harmless, some have demonstrated nervous and hyperactive abnormalities. In some cases, if they are not kept under the right conditions, they can become aggressive.

Opossums are know worldwide for their self-preservation instinct. When it feels threatened, the animal slows its heart rate, falls to the ground with its body totally rigid and with its mouth frozen open so that it looks like it is dead. Afterwards, when it sees that the danger is passed, it gets up and continues its day to day life.

Being an omnivorous species, this marsupial doesn’t waste any food it finds in its path. Their diet includes leaves, flowers, fruits, insects and even some small mammals, reptiles and birds.

Additionally, having been displaced from their natural habitat to the borders of towns and cities, opossums also eat food waste and the remains of other animals. They have very sharp teeth and an extraordinarily strong jaw that allows them to gobble up their prey voraciously.

These mammals reach sexual maturity at 10 months of age. During the mating season, the female releases a scent, which is unpleasant to humans. This lets the male know the best time to reproduce. The female reproductive system is divided into two vaginas, two uteri and two cervices. The male, for his part, has a two-pronged penis.

The gestation period is relatively short, because only two weeks are enough to grow a litter of up to 16 offspring. At birth, the baby opossums look for their mother’s nipples inside the pouch and stay there for approximately 50 days. When leaving their mother’s pouch, they hang on their mother’s back until they can function on their own.

What to do if you find a baby opossum?

As we mentioned earlier, it is common to find orphaned baby opossums. In case you come across a litter or a single individual of this species, there are some important considerations you should keep in mind.

The first thing is to try to save the animal’s life, and you can use your body heat and your clothes for this. First of all, gently place it close to your chest or stomach, and cover it with your clothes or a piece of cloth. The point of doing this it to provide it with the heat it needs. Then, when you feel it has regained a healthy body temperature, leave it wrapped in the cloth and transfer it to a small cardboard or plastic box.

It is a good idea to communicate with the local wildlife services so that they can take care of the baby. In their facilities, they have specialized personnel for these kinds of circumstances. Consequently, they will know how to respond to the situation with the necessary speed and responsibility.

While the specialized help is on the way, it’s important to feed the baby opossum. To do this, you can give it any commercial brand of whey: this will prevent dehydration. Give the baby two milliliters of whey for every 50 grams of weight every two hours, and you will see an improvement.

If you don’t have whey at home, you can make your own formula with two tablespoons of sugar and a pinch of salt diluted in one liter of water. Administer it with a syringe, which you should wash before each use and have one for each of the babies.

This is the first aid to provide in these cases. However, there are other types of care that only specialists can effectively provide. If you don’t have local wildlife services, go to a veterinarian. That way, he can tell you other actions you can take to ensure the welfare of the litter.

The Most Incredible Defense Mechanisms in the Animal Kingdom
Some flee quickly, others hide. There are some that blend in with their surroundings and others that play dead. The defence techniques in the animal kingdom are truly incredible. In this article, we'll tell you about some of the most fascinating! Read more »