The American Bullfrog: Why Is It Not Suitable as a Pet?

It’s necessary to be aware of the danger of exotic pet trafficking because, like the American bullfrog, they can often be potentially invasive species. 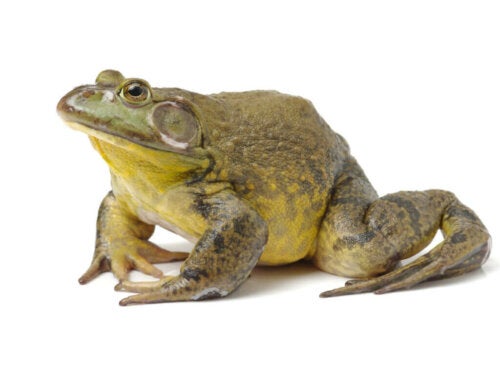 Amphibians also reach the homes of many exotic pet enthusiasts. However, we must be aware of the risks involved in keeping this type of animal. In many cases, they finish their pet days by being released into the wild, where they can multiply rapidly and compete with native species. Such an example is the American bullfrog.

This frog is native to North America, but it has managed to invade other areas of America, Asia and Europe. Consequently, this amphibian is in the database of the IUCN Invasive Species Specialist Group, and classified as one of the top 100 worst invasive exotic alien species on the planet.

The American bullfrog: a large amphibian

One of the most remarkable aspects of this animal is its large size, as adults can measures between 10 to 20 centimeters (4 to 8 in) in length. In addition, the largest specimens can weigh up to one kilogram (2 lb).

The American Bullfrog has an olive green pigmentation, with greenish or brown spots. The head is wide and flat with a fold behind each eye, which borders the entire eardrum. An essential characteristic for differentiating genders is the size of the eardrum, which is larger than the eye in males and the same size as the eye in females.

Its belly is whitish, and mottled with dark spots; its hind legs have dark stripes.

Why the American bullfrog has become an invasive species?

Invasive species have in common the ability to occupy a wide range of habitats and feed on a large number of species. This is part of their success in environments other than their place of origin. The American bullfrog proliferates as an invasive species thanks to a series of attributes presented below.

A wide range of thermal tolerance

The breeding season is usually in spring and summer. The number of eggs per clutch per female is around 20,000, but it can reach up to 40,000 in the case of larger mothers. If environmental factors are favorable, these frogs can lay several clutches of eggs per year.

The eggs hatch in about three to five days and the tadpoles —which reach 20 centimeters (8 in) in length— can undergo metamorphosis in just six months in warm waters. Of course, we’re facing an excessive rate of reproduction.

This animal adapts its diet according to the prey it finds in the environment. The American bullfrog feeds on all types of terrestrial, aquatic and flying invertebrates, as well as on vertebrates that come close enough.

This species hunts by stalking, as it remains motionless and camouflaged by the surrounding vegetation. Its greatest asset isn’t speed but deception: as soon as the prey passes by, it pounces.

The frog is capable of devouring fish, tadpoles, turtles and small snakes, as well as rats or bats that get close to the ponds to quench their thirst. Its feeding capacity is so big that it can undergo long periods of fasting after a copious meal.

Generally, tadpoles are herbivores but, analyzing their stomach contents, excrements and other organic remains have been found, as well as small aquatic invertebrates. So, it seems that —like their parents— they take advantage of anything that fits in their mouths.

The American bullfrog can occupy any type of habitat with stagnant or slow-moving waters, especially if it has abundant foliage and decomposing plant remains.

Additionally, the American bullfrog withstands relatively high levels of pollution, allowing it to live in habitats degraded by human activity. Some experts go even further, suggesting that the species shows a preference for these “artificial ecosystems”.

The danger of the American bullfrog as an invasive species

All these factors make the American bullfrog an invasive species. It has great potential to settle in ecosystems different from its own, and easily preys on, and displaces, native species.

In addition, the introduction of invasive species also brings another associated problem: the transmission of new diseases. The American bullfrog can be a carrier of fungi, bacteria, and viruses such as Batrachochytrium dendrobatidis, a pathogen that seriously affects the health of amphibians.

Nowadays, a program for the control and eradication of this invasive species in the wild has been launched. This plan includes awareness measures especially addressed to enthusiasts of exotic pets.

The Vietnamese Pig Is Declared an Invasive Species
The Vietnamese pig is an invasive species that should not be overlooked. In Spain, the government banned the possession of this animal because of this.  Read more »
Link copied!
Interesting Articles
Amphibians
Phantasmal Poison Frog: Care and Breeding in Captivity