Animals that Can Sleep with Half a Brain

There are animals able to sleep with half a brain in order to survive in the aquatic or aerial environment. Do you want to know which animals are those? Read along! 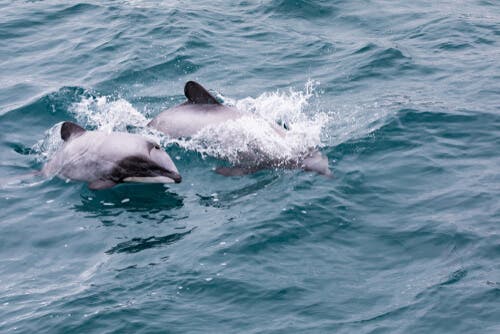 Have you ever wondered how whales or dolphins sleep? How do they get to the surface to breathe if they’re asleep? Also, what about the birds that have taken a long flight? Believe it or not, there are animals that can sleep with half a brain still awake.

Below, we’ll tell you more about this curious phenomenon and the most prominent cases that you’ll find in the animal kingdom.

Living beings adapt their behavior and physiology to the environment through biological rhythms. This means they live based on biological parameters, in a regular time interval. This interval can be hours, days, or months. Moreover, rhythms that repeated periodically over a certain time are called circadian rhythms.

Sleep and the waking state function is a circadian rhythm. Wakefulness is the period in which we remain awake, with sensory activity and motor skills functioning. On the other hand, during sleep, we “disconnect our sense of the surroundings” and reduce our motor skills.

This change in brain activity can be recorded in an electroencephalogram and is recognized by the appearance of the waves it produces.

Thanks to this kind of record, sleep studies can be carried out. The pattern the brain performs during sleep provides a lot of information about how it works in species where staying partly awake is key to their survival.

Which animals can sleep with half a brain still awake?

Marine mammals, birds, and possibly some reptiles adopt a state of half wakefulness (also threshold consciousness) during the day. This state is necessary to continue breathing in the aquatic environment or staying alert in a hostile environment.

To remain semi-awake, one part of the brain rests and the other remains alert and conscious of its environment. This phenomenon is called “unihemispheric sleep” and has been studied in depth in the case of dolphins.

Dolphins sleep with a single brain hemisphere. During that time, they keep an eye open to “keep an eye” on what’s going on around them. Adults often direct the open eye towards herd companions and the young towards their mothers. The amazing thing about this is that everything happens during continuous swimming.

Dolphins have a large brain in relation to their bodies. In fact, they are second in the ranking of brain sizes, the human brain taking first place.

These animals’ brains have numerous convolutions, which are the wrinkles that run through the brain hemispheres. However, the brain’s organization is different. For instance, the region in charge of auditory processing is very highly developed.

The large size of the corpus callosum, which is the physical connection between both hemispheres, is striking. Experts think that this area is the key to explaining how there are animals that can sleep with half a brain awake.

Moreover, there’s an alternation between hemispheres, which allows them to rest fully while swimming and breathing with the hemisphere that remains “awake”.

While only one hemisphere of the brain sleeps, the other remains conscious enough for the animal to rise to the surface in search of oxygen.

Sleeping with one eye open

In most mammals, most of the nerve fibers in the eye reach the opposite or contralateral brain hemisphere, and a smaller part to the hemisphere on the same side.

The dolphin is an exception. Each eye projects its nerve fibers into the contralateral hemisphere. Thus, this fact explains why they are able to open the opposite eye of the sleeping hemisphere.

Dolphins are social animals and often travel in groups. Constant surveillance in the herd can prevent attacks by predators, which can come from any direction and at any time when they’re in open habitats such as the ocean.

Unihemispheric sleep has also been observed in birds. They can still watch as they sleep with one eye to remain aware of their environment when they are perched on the ground. This ability also represents a valuable skill during migrations or long flights.

We never cease to feel astonished by the skills that animals have and use for their survival. What do you think about today’s topic? We hope you enjoyed it!

Discover How Dolphins Sleep
When it comes to how dolphins sleep, they need to go to the surface to breathe, which doesn't seem compatible with sleeping. How do they do it? Read more »
Link copied!
Interesting Articles
Birds
Lesser Kestrel, the Smallest of the Falcons